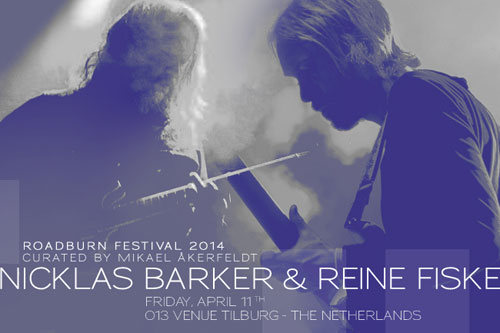 Roadburn are very pleased to announce that Reine Fiske is teaming up with Anekdoten‘s Nicklas Barker at Mikael Akerfeldt‘s 2014 curated Roadburn event on Friday, April 11th at the 013 venue in Tilburg, The Netherlands.

“Reine Fiske is in my opinion the best guitar player from Sweden and with that, one of the best in the world”, says Mikael Åkerfeldt, “He’s got an ethereal quality that I’ve not heard anywhere else. And teaming up with the lord of dark psych and hellfire, Nicklas Barker just cannot fail. I’ve no idea what these cats are up to for Roadburn 2014, but I do know it’ll be fantastic. I do know there will be a Fender Stratocaster (yes, Reine?) on stage, and a mellotron. I will be there. Watching. Worshipping.”