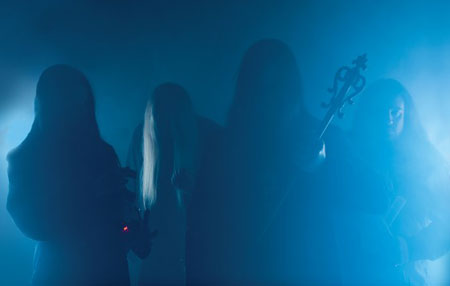 Following an incredible tour of the West Coast of the United States at the end of 2011, including a devastating performance at Rites of Darkness III, Australia’s epic doom sorcerers MOURNFUL CONGREGATION will return to The States in the weeks ahead!

The new pending tour will see MOURNFUL CONGREGATION returning to the US on an eleven-date trek erupting out of Seattle on September 14th and surging its way down the West Coast, and ending in Denver on September 28th, including a performance at Stella Natura in Soda Springs, California, a three-day fest in the wilderness of  Sierra Nevada’s Tahoe National Forest including Aerial Ruin, Aluk Todolo, Ash Borer, Blood Axis, Sabbath Assembly, Sutekh Hexen, Waldteufel, Wolvserpent and dozens of other acts. The Adelaide-based MOURNFUL CONGREGATION will be joined by Colorado blackened doom act Velnias as direct support for all dates, and Tim Call from Aldebaran will be sitting in on drums for MC on this tour. Additionally, a limited edition screen-printed tour poster with exclusive art by illustrator David D’Andrea will only be available at these eleven dates.

This new burst of touring precedes a series of MOURNFUL CONGREGATION reissues, as the band’s current stateside label home 20 Buck Spin will be reissuing their Tears From A Grieving Heart, The Monad Of Creation and acclaimed The June Frost full-lengths exclusively to North America. All three of these classic back catalog releases will be released on October 16th on CD and digital download, and are all must-hear albums for diehard fans of Skepticism, Opeth, Pallbearer, Katatonia, Evoken, Ahab, Loss, Samothrace and Disembowelment.