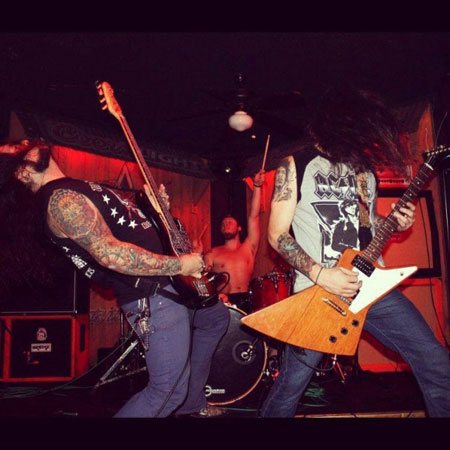 The Dallas, Texas-based trio of heavy rock bad asses known as MOTHERSHIP is about to make a return the road for a brief run with psychedelic doomsters COMMUNION.

Those who missed out on the band’s Spring run with GYPSYHAWK now have a second chance to experience some no-frills rock n’ roll magic when MOTHERSHIP kicks off their Summer tour on June 24th at Hotel Vegas in Austin, TX. This run will include a June 28th stop in Trabuco Canyon, CA for Show Class Magazine’s Born Free 5 Festival People’s Champ Party. Details for Born Free 5 and the pre-party HERE.

In other news, the song “Lunar  Master,” off of MOTHERSHIP‘s self-titled debut, has been ranked #3 on The Paranoid Hitsophrenic ‘Regular Old Doom Charts.’ Check out the rankings, which includes a link to a stream of the track, at THIS LOCATION.

With their self-titled debut, MOTHERSHIP masterfully delivers 70’s-tinged U.S. hard rock with a sound that satisfies like a steaming hot stew of UFO and Iron Maiden, blended with the southern swagger of Molly Hatchet and ZZ Top, MOTHERSHIP‘s goal from the beginning has been to carry on the tradition of the classic rock style; updated and amped up for the modern day. Originally self-released in 2012, MOTHERSHIP & Ripple Music have joined forces to re-release this stunning debut record on CD & LP.