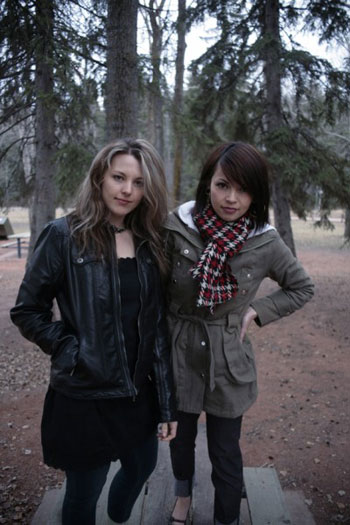 Hamilton, Ontario-based Sonic Unyon Metal are proud to announce the multi-album signing of noise-doom duo MARES OF THRACE to their label’s ever-expanding roster.

Based out of Calgary, Alberta, the crushing MARES OF THRACE is comprised simply of guitarist/vocalist Thérèse Lanz and drummer Stefani MacKichan, who coalesce their talents into an organic style of beautiful and destructive atmospheric doom-laden metal.

“Some of the most influential records in my life, from way back in the 90s up till now, were Sonic Unyon releases,” says Lanz about the signing. “It’s impossible to understate the impact the label has had on Canadian independent music. Accordingly we are incredibly proud and stoked to partner with Sonic Unyon Metal for our upcoming records.”

MARES OF THRACE released their debut album The Moulting in 2010 via Arctodus Records. The Moulting was instantaneously well-received by North American press outlets including Decibel, Revolver, Blabbermouth, even scoring the #1 spot on Hellbound.ca’s Canadian metal album of the year list. The band toured Canada in support of the album immediately after its release, followed by a US tour in 2011. Additionally, Thérèse played bass for KEN Mode for the first half of 2011, touring with them in support of their latest album Venerable (Profound Lore).

The newly completed new LP from MARES OF THRACE, and first for Sonic Unyon Metal, is entitled The Pilgrimage. Recorded in October and November of 2011 at Chicago’s Engine Studio with producer Sanford Parker (Nachtmystium, Pelican, YOB) and mastered by Collin Jordan at Boiler Room, the final touches on the release are being handled now, preparing the album for worldwide release this April.

Stay tuned for more info on the release of The Pilgrimage as well as North American tour announcements for MARES OF THRACE over the coming weeks.