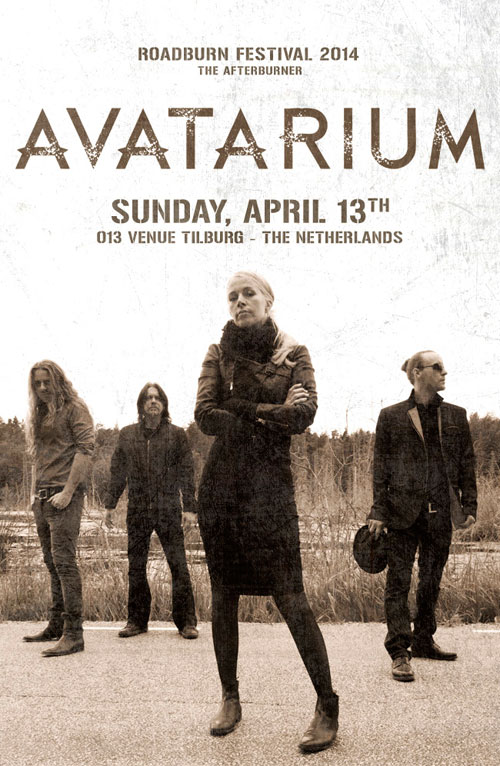 Candlemass‘ Leif Edling is currently redefining doom with his new project, called Avatarium. The band’s striking debut full-length (out on Nuclear Blast) easily ranks among the best Roadburn-related albums of 2013, and it also strikes the perfect balance between epic doom and classic rock, reminiscent of Jethro Tull, Black Sabbath and Rainbow.

The crushing doom of Candlemass may be prevalent through the album, but Avatarium‘s 60s / 70s feel is also trippy, with a creepy and haunting vibe that makes space for moments of beautiful tranquility before pummeling you with surgically precise riffs of sheer Edling brilliance.

Foremost among Avatarium‘s not so secret weapons are the haunting vocals of Jennie-Ann Smith — they infuse the introspective, quiet passages with goosebump-inducing emotional power, and propel the heavier moments into a cathartic juggernaut of inspired doom intensity.

“Roadburn 2014 will be the first time ever I do gigs with two different bands in the same weekend”, says Leif Edling, “But playing with Avatarium at the Roadburn Afterburner show will be exciting as it will be one of our first gigs outside Sweden, and a rendezvous with the international press and fans. I hope we can pull it off!

The album has received great reviews – it feels like I’m 20 and about to make my live debut again. What’s cool is that many of the songs from the first album are written for a live situation, specially arranged to grow and become something more than the recorded versions, and now we have the opportunity to play them as we thought they could be played… or fail completely doing it, hehe. Well, guess we’ll find out at Roadburn!

Anyway, I’m thrilled, stoked and honoured about the whole thing. ‘Moonhorse’, ‘Boneflower’ and ‘Lady In The Lamp’ are songs that have the potential to capture an audience and it will be a thrill to present Jennie-Ann’s voice to the RB crowd as well!  See ya soon!”

In collaboration with Roadburn‘s 2014 curator Mikael Åkerfeldt, Roadburn can’t wait to welcome Avatarium to the 2014 Roadburn Afterburner on Sunday, April 13th at the 013 venue in Tilburg, The Netherlands.  Mikael Åkerfeldt comments: “At another metal talk / wine session Leif once suggested we should write music together. I said ”of course”, not really aware that I had little time for anything apart from my current business. Leif is a workaholic and all of a sudden he texted me saying; ”I’ve got 2 songs ready! Come on!”

“I got somewhat stressed out and gradually it was understood between the both of us, that I would not be able to find the time to participate. However, Leif soldiered on, found an amazing line up, fronted by the charismatic genius vocalist-ess, Jennie-Ann Smith and has now released a 12” single as well as their debut album. Hearing some of the early demos made me go ”What the fuck?!” Wishing I’d shuffled my priorities around. It was/is so good. So fucking good! Is it doomy? Goddamn right it is! Avatarium got a sound that is both traditional metal and something ”new” that I can’t put my finger on what it is. I think it might be the elusive ”magic”! They’ve got it.”

By the time Avatarium hit the main stage on Sunday, April 13th, Walter & Co are certain that you’ll be enchanted and mesmerized by the band’s psychedelic atmosphere, classic-yet-timeless doom and perfect production.

OM Set The Controls To The Heart Of Europe, Announcing Tour Dates This November