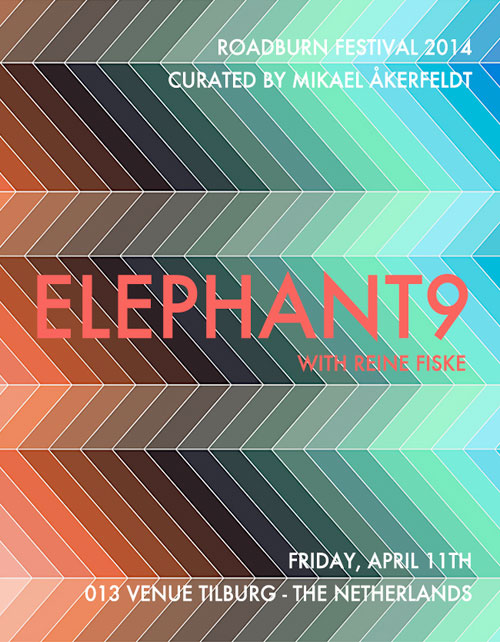 The Roadburn Crew are very excited to announce that Elephant9 with Reine Fiske will bring mindblowing modern rock ‘n’ jazz psychedelia to Mikael Åkerfeldt‘s curated 2014 Roadburn event on Friday, April 11th at the 013 venue in Tilburg, The Netherlands.

Writers have called upon names like Tony Williams’ Lifetime, Deep Purple, Brian Auger, Emerson Lake & Palmer and early seventies Miles Davis to describe the music, pointing to the fact that Elephant9 (Ståle Storløkken, Nikolai Hængsle Eilertsen and Torstein Lofthus) are comfortable in both rock and jazz.

“This Norwegian / Scandinavian bunch consists of well-seasoned jazz / rock / psych musicians who’ve musically gone ”all in” with this project”, says Mikael Åkerfeldt, “And with the addition of string-wizard Reine Fiske (Landberk, Morte Macabre, Paatos, Dungen etc) on guitars it’s certainly vouches for some ridiculously amazing music. Elephant9 are quite a new fascination for me, since I generally don’t listen much to new music, but they blew me away! It’s moody music, often laced with sudden flurries of virtuosity, and with a rather strong musical connection to Scandinavian lore.If you want music by the book, this is not for you. If you desire otherworldy musical experiences and explosive dynamics however, your search is over.”