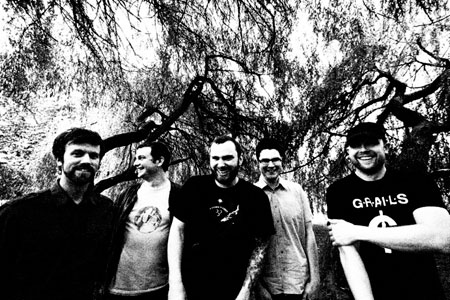 Monolithic and intensely captivating are just 2 descriptions that don’t even come close to representing the immense sound of LATITUDES, who have been hand picked by Human Disease Promo to be the latest addition to the bill for DesertFest 2013.

Huge, soaring riffs layered in a masterful fashion, cut into with spacey atmospheric synth, create a sound hovering somewhere in the realms of part shoegazer / post metal, part hammering sludge, part dark prog. LATITUDES have never been a band tied to a stringent set of rules which has enabled their sound to flourish into the cacophony of noise and ethereal influences found within the latest release Individuation (2012), an album which has received much praise from press though to peers and fans alike, finding its way quite justifiably into Terrorizer’s top 50 albums of the year segment. This latest offering follows on from previous album – Agonist, a piece of work held in particularly high regard for its versatile heaviness and powerful melodic crescendos that saw the band likened to the much missed Capricorns and also the likes of Isis and Cult Of Luna.

LATITUDES are certainly not newcomers though to writing deep steamrollering riffs. Debut EP ‘Bleak Epiphanies In Slow Motion’ saw them hone in on a powerfully driving sound back in 2007, a direction the band had been working towards for a time prior to this too. A well balanced, yet monstrously heavy live show, known for demanding the attention of all ears (and the and the nodding in unison of every head in the room) sought to give the band a strong reputation and respect all over the UK, solidified further by shows over the years with Kruger, Minsk, A Storm Of Light, Nachtmystium, Baroness, and even Cathedral.

LATITUDES are most definitely worth taking the time to catch when they play The Black Heart stage on the final day of this year’s DesertFest here in London town, as they’ll be certain to create a colossal tide of swirling and dynamic heaviness.