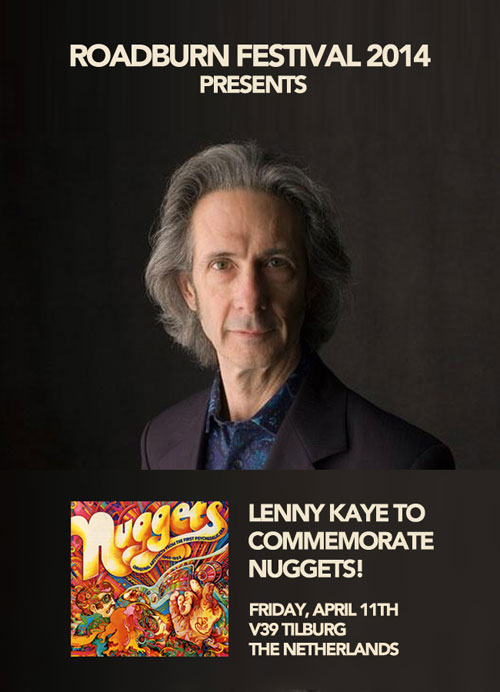 In addition to Lenny Kaye’s performance with Harsh Toke at Mikael Åkerfeldt’s curated Roadburn event on Friday, April 11th, Walter & Co are very excited to announce that Lenny will commemorate the Nuggets collection he compiled for Elektra Records under the direction of Jac Holzman.

In an intimate setting at the V39, located across from the 013 venue, Lenny will talk about this landmark collection of 60s psych and garage rock that has excited and inspired in equal parts over the past 40 years, and defined the genre. For Lenny, the experience of compiling Nuggets would serve as both a springboard and a guiding light with respect to his work with Patti Smith and more.

For many of you at Roadburn, Nuggets played a crucial role in the development of our musical identities. This impressive collection became a cherished companion in our ongoing quest to unearth the finest oddball proto-metal and heavy psych from the 60s and 70s that form the very core of the festival.

The Roadburn Crew still need to pinch themselves to make sure that Lenny Kaye’s commemoration of Nuggets at Roadburn 2014 on Friday, April 11th (from 1-2pm) at the V39 in Tilburg, The Netherlands, isn’t some kind of psychedelic fever dream!