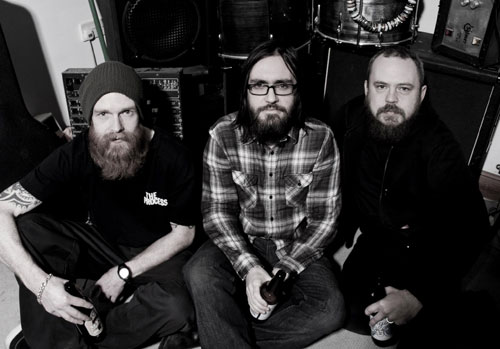 Glasgow’s psych-doom trio HEADLESS KROSS will hit Irish shores at the beginning of August for 3 dates off the back of their new split 12″ with Lazarus Blackstar which is out now on Head Of Crom Records (purchase HERE) and the tour schedule is as follows:

Time, that Destroyer of Days, the force that marches us irresistably towards death, has a new drum major. With their unrelenting pscyhedelic-tinged doom, HEADLESS KROSS, a three-piece drawn from the depths of Scotland’s underground music scene, have made it their mission to provide us with a monolithic soundtrack as we trudge towards the End Times.

But HEADLESS KROSS are not merely vessels of bestial noise – they are blessed with a higher state of conciousness that allows them to transcend this Earthly bind and take the listener on a celestial exploration of rock’s outer limits – where they transmit riffs so perfect, lesser mortals are driven to invade the stage and try and steal the notes for themselves like a backwards child snatching at glittering sunbeams.

So don’t make the mistake that fool Christ did – when they come to your town, genuflect before the HEADLESS KROSS and hope that the machinery of their unrelenting musical juggernaut will spare you your pitiful fate.