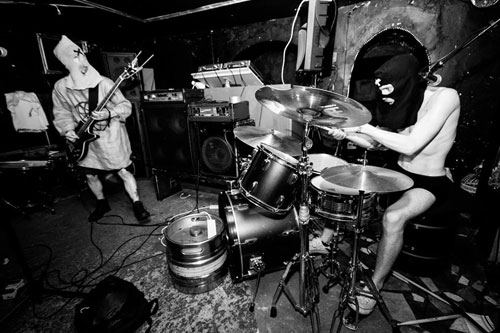 Ghold is a self-described ‘weight & grunt power duo’ formed in Brixton in 2012.

Keeping things lean and mean with a stripped-down approach, drummer/vocalist Paul Antony and bassist/vocalist Alex Wilson are aiming for the prog-tinged groove of Melvins at their disturbed best. Along with the occasional jump to warp speed thrash, vocals are gouged out in gang-chanting, onslaught-like hardcore.

Including their self-titled demo they have put out three discs to date, growing progressively more adventurous with the likes of the annihilating 14 minute opener ‘This Suffering Must End’ from the ‘Galactic Hiss’ EP last September.

They have shared the stage with protagonists of apocalyptic visions such as Bast, and have appearances lined up soon with the likes of Palehorse and Grimpen Mire. Preparing to set the standard at DesertFest 2014, this band will do it’s best to raise the dead from their eternal slumber in Camden this April. Be there to feel the ecstasy of Ghold.