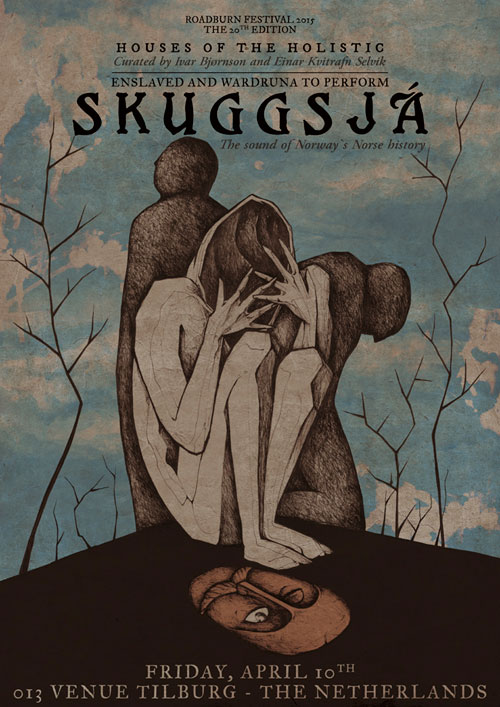 Walter & co are elated to announce that Enslaved and Wardruna will perform Skuggsjá, the sound of Norway’s Norse History at Houses of the Holistic, Ivar Bjørnson‘s and Einar “Kvitrafn” Selvik‘s curated Roadburn event on Friday, April 10 at the 013 venue in Tilburg, The Netherlands.

Written by Bjørnson and Selvik for the 200th anniversary of the Norwegian Constitution and premiered this past weekend at the Eidsivablot festival, this will be Skuggsjá‘s first performance outside of Norway, and will certainly be one of the highlights of the 20th edition of Roadburn Festival.

Skuggsjá translates into ‘mirror’ or ‘reflection’ in the Norse language, and the commissioned piece not only contextualizes harder music’s role in the democracy in Norway in 2014, but also joins threads from the country’s ancient musical history and solidifies harder music’s position as Norway`s most important cultural export.

By highlighting ideas, traditions and instruments of their Norse past, Skuggsjá will tell the history of Norway and reflect relevant aspects from the past into the present day. In light of this they will reflect on themselves as a people and nation. In a magnificent tapestry of metal instrumentation, a wide variety of Norway and Scandinavia’s oldest instruments, and poetry in Proto-Scandinavian, Norse and Norwegian, Skuggsjá will be a fusion between past and present, both lyrically and musically.

Roadburn simply can’t wait to experience it themselves, to hear how how Norwegian metal has developed from its rebellious roots into the highly acclaimed artistic expression of a complex music genre, under Norway‘s constitutional right to freedom of speech.