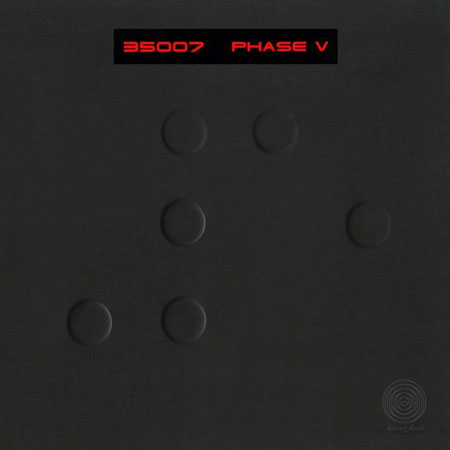 Test pressings have been received and approved, so the plant is pressing 500 of these baby’s up right now. The final installment of the 35007 vinyl series is almost upon us. All other albums of the band have been released on vinyl before (by Stickman and Man’s Ruin among other labels) but Phase V, released on CD by Stickman Records in 2005 was never released on the mighty vinyl.

The album has been described as: “35007 are instrumental jamming masters; theres lots of melody in the tracks underpinned by the quality rhythm section over which the guitars and other effects playfully interact. As I said in my review of Liquid; 35007 are all about ebb and flow and Phase V flows superbly over rocking, psychedelic jamming terrain perfectly for over 40 mins.” (Amplified Man at Amazon.co.uk).

But the best thing of course is to listen to the album itself to make you mind up. If you have Spotify you can listen to the whole album HERE & stream the opening track ‘20 09‘ below.

To celebrate the release of this Dutch space rock classic we also have a T-shirt available with the minimal but beautiful design.

Both the album (on limited gold and black vinyl) and the T-shirt are available over on the Burning World Records webshop at Burningworldrecords.com.

Secretive by nature, the group rarely performs live, and when it does, it’s usually with the help of a visual specialist to provide a truly multimedia and multi-sensory experience. Both their 1994 debut, Especially for You, and its 1997 follow-up, 35007, interspersed occasional vocal tracks amidst the prevalent instrumentals, but even these were summarily abandoned on subsequent releases like 2001’s Sea of Tranquility EP and 2002’s full-length Liquid.