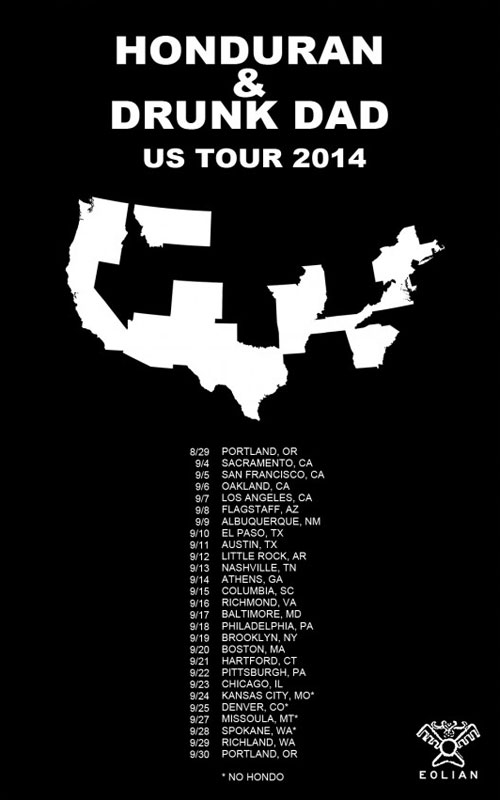 You can tell from the Eolian relation that’s it’s already going to be an ugly tour in its inception. But no, this upcoming DRUNK DAD and HONDURAN US trek is just a really ugly looking tour based upon the new flyer, the image resembling a mangled W-shaped grin where every tooth has been reworked with the outline of a boot… an appropriate if not totally accidental visual metaphor of said trek. From August 29th through September 30th, this Portland-based duo will plow through a counter-clockwise arc of the American colonies, with twenty-seven municipalities on the shitlist for the scummiest beatdown of the season, including shows with Same Sex Dictator, Godstomper, Stapled Shut, The Drip, Rabbits and tons more.

Additionally, both bandswill perform matinees at the Eolian Empire-organized D.I.Y. “anti-fest” dubbed Festicide this weekend, a celebration of the heavy, noisy, and weird featuring Eolian artists Rabbits, Diesto, Towers and Big Black Cloud in addition to DRUNK DAD and HONDURAN, among non-label friends including Thrones, Stoneburner, Hungers and Sloths. The three-day, seven-show, twenty-five-band gathering will raid Portland, Oregon from August 15th through 17th, featuring shows that are all either $5 or free. A note to fest-goers: The East End had a fire and is out of commission for the festivities, so the show with HONDURAN, Rabbits and more this Saturday the 16th has been moved to Slabtown.

With HONDURAN jacking their mangled Northwestern flair to a crushing barrage of Bay Area-style crusty sludge/powerviolence and a cavalcade of cynicism, they’ll deliver damaging jams from their July 2013-released debut LP, Street Eagles, a dark, dangerous trip through Rip City, a labyrinth of blasted beats, chunked-up chug-a-lugs, and warrior cries with nary a solo in sight; all meat and bone, recorded by Fester (Rabbits, Nux Vomica, Stoneburner) at Haywire Studios. Experience a brutal, sonic bludgeoning in all its fine detail. Three of the album’s songs are also featured in the 2014 low-budget metal malcontent scammer pic film, Buzzard.

DRUNK DAD will be tackling audiences with their raucous brew of sonic grunge-core depravity — the kind of thing you put on to watch your neighbor’s plants wilt — while the country is still trying to air out after being ravaged by the band’s debut LP, Ripper Killer, at the beginning of July.

Stream all of DRUNK DAD’s Ripper Killer LP at Invisible Oranges HERE and sample live footage of some of the LP’s carnage below. Watch HONDURAN’s official video for Yawnmower also below and get the full Street Eagles experience HERE.