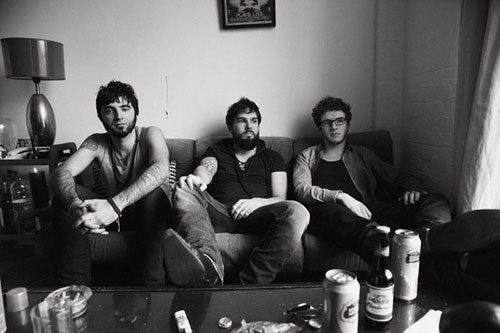 Citizens of the world, Bright Curse have been kicking up a right old stink in our very own London since their acid and angst infused inception during the summer of 2012.

The trio, who hail from France, have been daring and dastardly enough to produce something that is all too rare nowadays: original music. Now, that doesn’t mean to say there aren’t echoes of inspiration in there in abundance. From Queens of the Stone Age to Graveyard to Dozer, they’re all present and accounted for yet buried so deep beneath the soil of Bright Curse’s smoky, solo-laden, shadow dwelling brand of rock it’s near impossible to put your finger on a dominant influence.

Their EP track ‘The Hermit’ is somehow both mesmerising and monstrous all at once; haunting whispers one moment lead into a crushing war-cry of composed fury the next that has Vikings racing away in retreat. Complete with obligatory badass artwork adorning their t-shirts Bright Curse could well have been designed with DesertFest in mind. Witnessing the prophecy unravel will be a mind-bending experience, for sure.