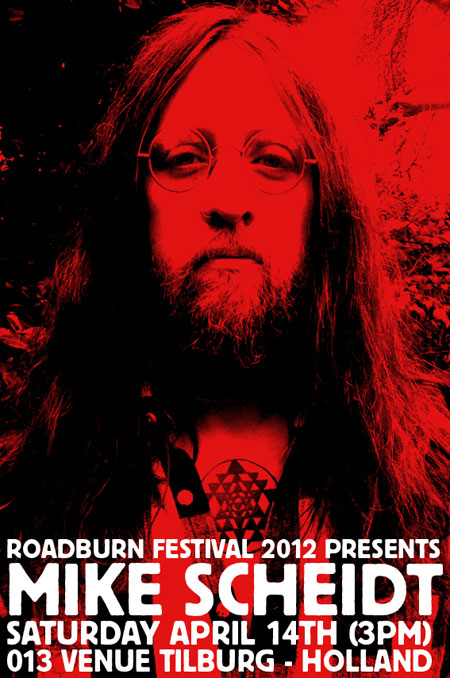 Roadburn are elated to announce a very last minute, but extremely exciting addition to this year’s festival: Yob‘s Mike Scheidt will play his first ever European solo performance at Roadburn 2012 on Saturday, April 14th at the 013 venue in Tilburg, Holland.

Doling out psych-tinged doom metal jams with his Oregon based trio Yob since the 90′s, Mike Scheidt is about to release his solo debut, Stay Awake, via Thrill Jockey on June 12. Taking influence from country and rock acts like Townes Van Zandt, Guy Clark, Merle Travis, and Crosby, Stills, Nash and Young, Scheidt strays away from his doom metal leanings with his solo music, featuring some different facets of his talent. Expect lots of acoustic guitar played by a guy who learned how to finger-pick from former Captain Beefheart Magic Band member Zoot Horn Rollo!

To those familiar with Mike Scheidt, the sincerity, raw emotion, and Eastern philosophy that have found their way onto Stay Awake will be no surprise. However, the six-songs on the album combine elements of folk (both Western and Eastern) with epic arrangements and the dramatic emotions, the latter being hallmarks of classic rock ballads. Says Scheidt, “I was exploring arrangements not unlike Yob in some ways.” The lyrics, according to Scheidt, are based on “the present moment, hope, love and redemption. The big picture caught in a snapshot, looking at fear and doubt squarely, and making friends with them. My words are sympathetic / empathetic to sadness and heartbreak, while exploring transcendental themes in the same breath.”

Mike Scheidt will performing songs of Stay Awake at Stage01 (formerly know as Bat Cave) on Saturday, April 14th, starting at 3pm, only 30 minutes after the doors open. Be there on time!