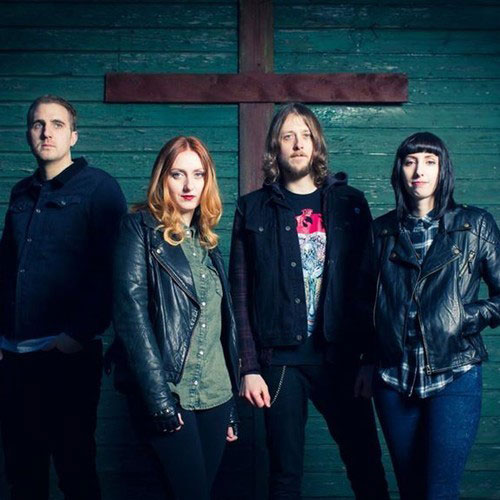 Merseyside based riff-factory STEREO VIRGINS have often found themselves on the outside looking in. With a lack of a vibrant local outlet for their riff heavy stoner rock to flourish in, they turned to the city of Leeds and its music scene’s notorious camaraderie for direction, where they soon fell in with a Motley Crüe of heavy metal worshippers including Black Moth, Wet Nuns, Humanfly, BongCauldron and more.

Comprised of sisters Beck and Rachel Alveston (bass and guitar/vocals respectively) with Lyam Kirkham on drums and Josh Homme-alike gentle-giant Stu Sinclair on lead guitar duties, the quartet knuckled down last year to bring their musicianship up to a level where they could compete with the best.

The first track taken from their forthcoming debut AA-side single, which is set for release 3rd March via Crone Records on limited, the track ‘333‘ gives a suitable taster of the murky, red-lit world that Stereo Virgins strive to operate in.

Press play, commence headbang, because this is one big bastard riff, check it out below:

Taking their lead from friends and contemporaries in breakthrough stoner bands Black Moth, Wet Nuns and Humanfly, the quartet began stretching their wings further afield, really drilling down into their sound and securing supports with the likes of Throne, Lesbian, Hawk Eyes, Lafaro, Blacklisters, Iron Witch and The Bendal Interlude.

A slot on the coveted Screenadelica stage at 2013’s Liverpool SoundCity Festival proved that STEREO VIRGINS had done their homework, with a rapturous reception from a crowd suitably impressed with how far the band had come in a short space of time.

Their tenacity and drive to break free from local constraints is mirrored in the intensity of their sludgy, guitar heavy offerings that quake with de-tuned bass and fuzzed out solos that fans of Goatsnake, Down and Black Sabbath will rejoice in. Alveston’s vocals drip with both allure and menace, providing the perfect trippy accompaniment to the sledgehammer riffs and rhythms provided by the rest of the band, framed by Sinclair’s off the wall and discordant lead guitar work.

STEREO VIRGINS will be revealing more music, tour dates and videos over the coming months.