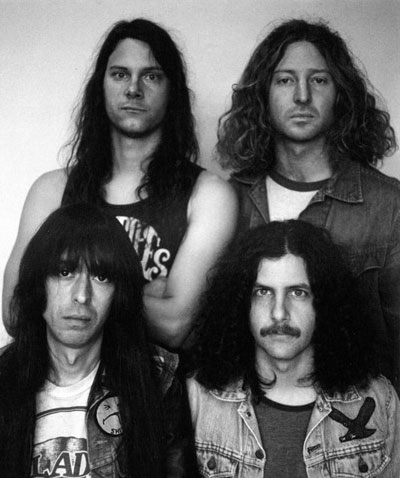 Portland, OR sci-fi psychmetal rockers DANAVA (pronounced: DON-UH-VUH) have signed to NYC’s Tee Pee Records.  The group, who just completed a month-long European headlining tour, will enter an undisclosed studio this summer to record their Tee Pee debut and follow up to 2011′s Hemisphere of Shadows, which was called “a 37-minute contact high” by the Sacramento News & Review.

Speedy and sinuous, DANAVA out rocks, out progs, out psychs and out retro-proto-metals all comers.  Led by singer / guitarist / songwriter Greg Meleney, the quartet creates utterly unique astro-rock that is a thing of spectral beauty.  Described as “a journey into a parallel sonic universe”, DANAVA‘s sidelong songs are sprinkled with spacey synth-y FX that push the band’s sound into outer space. This is progressive riff rock; barn-burning scorchers full of unison and tongue-twisting melodic runs that melt listener’s brains. DANAVA‘s relentless fret-board wizardry — cast in the spirit of Iommi and Schenker — produces extended elliptical structures that live in a proto-magic era somewhere between Lemmy in Hawkwind and Lemmy in Motörhead, leaving sufficient room for wailing, noodling solos and a vocal croon that is halfway between Ian Gillan or Geddy Lee’s high-pitched, semi-operatic prowess and Ozzy Osbourne’s insidious howl.  The band’s songs list from side to side like a vessel cast adrift on an ocean of battering soundwaves.

“We are absolutely thrilled to partner with Tee Pee Records to unleash the fourth Danava record upon the underground,” comments Meleney.  “Many of our friends and contemporaries have passed through the ranks and we’re thrilled to march onward into the streets with them at our side.”

In the past seven years, DANAVA has unleashed a slew of critically-celebrated releases including the full length records Danava (2006), UnonoU (2008) and Hemisphere of Shadows (2011) as well as split releases with Uncle Acid & the Deadbeats and now-labelmates Earthless and Lecherous Gaze.  The band has toured the world relentlessly both as headliners and alongside bands such as Down, Melvins, Witchcraft and Thrones.