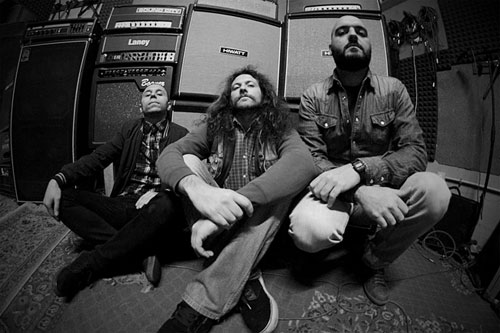 Italian psychedelic rock band BLACK RAINBOWS new six-song 38-minute mini album sees the trio leave their earlier stoner rock motifs for a sound that keeps with the HEAVY but heads to the stars.

Holy Moon offers a deep brew of deep heavy space rock that follows the lineage of early Hawkwind through Loop and The Heads into White Hills, ‘Monsters Of The Highway’ recalls Monster Magnet and Thee Hypnotics with Gabriele Fiori excelling with his powered Detroit infused leads, ‘Chakra Temple’ slows things down over an Eastern drone worthy of both Simon House and The Black Sun Ensemble whilst ‘The Hunter’ adds a heavy Groundhogs boogie edge spiced up for 2013 in a similar vein to Ty Segall and Fuzz. ‘If I Was A Bird’ lessens the pace and adds a reverberating acoustic guitar as the centre piece to a tune that sounds a little like a distant Jack White vibing out to Jimmy Page. Ending with their big muff ridden ’90s sounding take on of MC5’s ‘Black To Comm’ Holy Moon shows how BLACK RAINBOWS have grown away from stoner metal into a band steeped in space rock, drones and that increasingly popular early ’90s reimagining of Detroit rock.

Fans of White Hills, Dead Meadow and Black Mountain will go apeshit for these highly charged Italians and you can get a teaser of this new EP with the track ‘The Hunter‘ below:

Holy Moon Tracklist:
– Holy Moon
– Monster Of The Highway
– Chakra Temple
– The Hunter
– If I Was A Bird
– Black To Comm (MC5)

Holy Moon will be released on the 1st November 2013 via Heavy Psych Sounds and available in vinyl and digital formats.