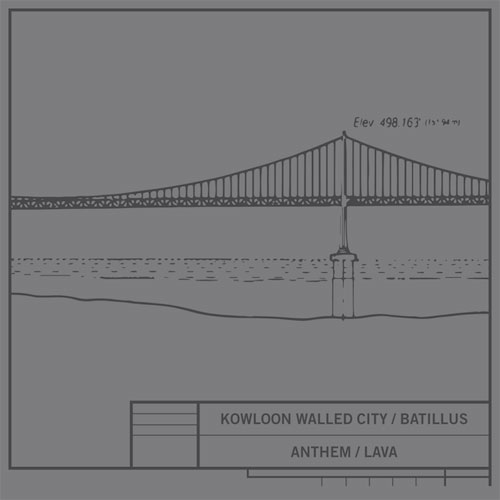 Brooklyn’s industrial sludge fiends BATILLUS have premiered their side of the upcoming split 7″ with KOWLOON WALLED CITY. The track is a cover of Ministry‘s ‘Lava’ with both Fade Kainer of BATILLUS and Scott Evans of KOWLOON WALLED CITY on vocals. Stream it via MetalSucks HERE.

Side A of the split 7″ features KOWLOON WALLED CITY playing a cover of the Godflesh classic ‘Anthem’ with Fade Kainer of BATILLUS on vocals. Stream it via Stereogum HERE.

Recorded at Sharkbite Studios in Oakland, CA and mixed by Scott Evans at Antisleep, the split is the third in a series of 7″s released by Brutal Panda Records.

The split will be officially released on December 10th and is available for pre-order HERE. Also released in the 7″ series were splits from BLACK TUSK / FIGHT AMP and HELMS ALEE / LADDER DEVILS. The fourth and final release will be a split between WHORES and RABBITS with details to emerge soon.