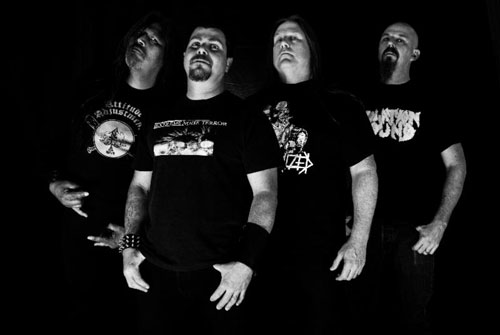 “If I had to summarize this comic book in a sound bite, it would be to say ‘Food tastes better screaming.’ There’s your visual,” President and Publisher of E-Comix, Vince Brusio, told MetalSucks. “Carnage unseen since old school ’80s splatter films. This book is brutal because Autopsy is brutal. So consider yourself warned, kids. No apologies. No regrets.”

As with the publisher’s first title (Dying Fetus: Supreme Violence), Autopsy: Feast for a Funeral is a fully-authorized title by one of the music industry’s biggest names in metal. The comic book tells the tale of college kids who make a terrible mistake. One for which they must suffer, and pay in blood. When they play with stolen property at an impromptu field party, they open a doorway that allows spirits into our material world. A rescue is planned, but none of this is made known to a rival biker gang that doesn’t appreciate their turf trampled on by strangers. Seeking vengeance, the gang approach an old abandoned house to wreak havoc on their party crashers, and learn too late that once the door to Hell is opened it can’t be closed.

Aside from Autopsy: Feast for a Funeral, the iconic death metal band is currently gearing up for the release of its seventh studio album, Tourniquets, Hacksaws and Graves, out April 29 on Peaceville Records. 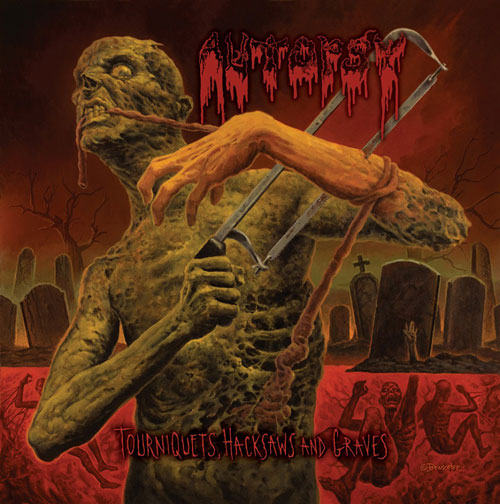 Tourniquets, Hacksaws and Graves can be pre-ordered now via the Peaceville webstore HERE, while a new song, ‘The Howling Dead‘ can be streamed on the album’s mini-site HERE.

Commented the band: “TOURNIQUETS TIGHTEN…. HACKSAWS RIP….. GRAVES ARE FILLED….. THIS IS AUTOPSY, THIS IS DEATH METAL…. With the stench of ‘The Headless Ritual‘ still permeating the befouled air, AUTOPSY has once again come for your very metal soul with their newest blood soaked homage to all things dark, twisted and horrific….once again bone crushingly heavy nightmares await….’Tourniquets, Hacksaws and Graves‘ will awaken the most depraved part of the coldest zombie’s stare…..blood will flow, brains will be destroyed, coffin lids will be opened…”

Tourniquets, Hacksaws And Graves was recorded at Fantasy Studios with producer, Adam Munoz, and sees a continuation of AUTOPSY‘s pursuit of the ultimate in metallic horror and extremity, featuring the longstanding combo of Eric Cutler and Danny Coralles on guitars, Joe Trevisano on bass and Chris Reifert on drums/vocals. From all-out death metal savagery to crawling, doom-filled sludgery, Tourniquets, Hacksaws And Graves further pushes the limits of taste and brutality with this latest relentless onslaught of terror from beyond the grave.