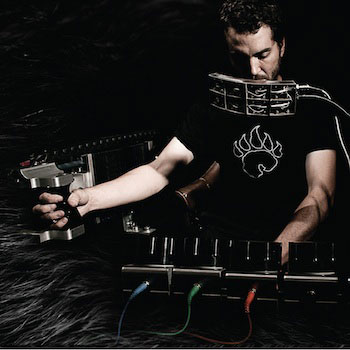 American Aftermath have just posted an in-depth interview with Tristan Shone, the man behind nightmarish electronic/doom mindfuck AUTHOR & PUNISHER. The site is also hosting an exclusive stream of “Flesh Ants,” a brand-new song off the project’s forthcoming Seventh Rule Recordings debut. Ursus Americanus is due out as digipack CD on April 24, 2012, and will be unleashed upon the public via a West Coast tour (dates to be announced soon!).

Listen to “Flesh Ants” below and you can read the interview with Tristan over at American Aftermath HERE.

AUTHOR & PUNISHER can be described most succinctly as “industrial doom,” but of course, is much than a mere genre tag. This one-man project utilizes primarily custom designed and fabricated machines and speakers, devices that draw heavily on aspects of industrial automation and robotics and focus upon the eroticism of interaction with machine.  The machines are designed to require significant force from the performer, aligning he or she with the plodding doom influenced sounds that are created – “Like Godflesh meets The Bug meets Flying Lotus,” according to MSN Metal’s Adrien Begrand.

AUTHOR & PUNISHER has performed with and shown these machines extensively at festivals and exhibitions in the United States and abroad, and has more live actions planned for 2012.