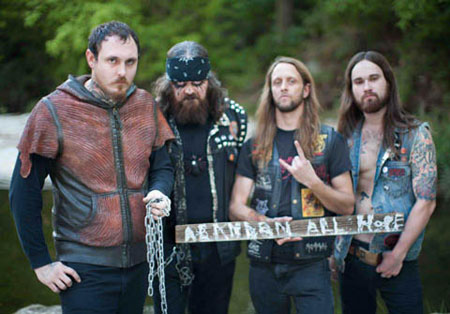 Occult rock merchants ANCIENT VVISDOM unveil their latest video for “Children Of The Wasteland” via Metal Injection. The tune comes off the band’s A Godlike Inferno full-length, reissued via Prosthetic Records on April 24. Peep the sobering visuals below or at THIS LOCATION.

Recorded at The Bubble in Austin with engineer/co-producer Jason Buntz with additional instrumentation including the use of a bowed stand-up bass, machete/bamboo percussion and synths, A Godlike Inferno’s serpentine hymns continue to be embraced by critics and cultists alike. Terrorizer crowned the record “a haunting, riveting slab of acoustic-driven, Satan-loving mastery,” Metal Hammer championed the band for their “acoustically driven occult rock where each song is a spell,” while Metal Underground commended their “rich melodies and memorable chorus lines.” This Is Not A Scene agreed noting : “A Godlike Inferno strikes an engaging balance between light and dark, bringing the shadows into the sun without striking down those it want to impress, and impress it does, ” while Blistering added: “ A Godlike Inferno is dark…like the pits of the devil’s soul… Get this.”

Nominated for Best Underground Band at this year’s Metal Hammer Golden Gods Awards, the Austin, Texas-based diabolic folk metal collective are currently wrapping up a European tour, which marked their first time back on the road since supporting Ghost on an uber successful national jaunt earlier this year.

For ordering info, point your browser to THIS LOCATION and if you missed it the first time, be sure to check out the band’s video for “The Opposition” HERE.