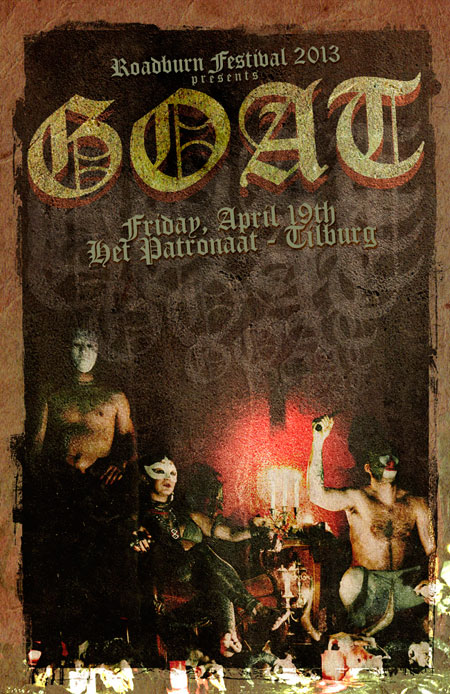 Roadburn are elated to announce that GOAT, one of the most obscure and original psychedelic groups in the world, have been confirmed for Roadburn Festival 2013. The band will play in Het Patronaat in Tilburg, Holland on Friday, April 19th.

Who are GOAT? Some claim they are undocumented immigrants dedicated to making music while hiding from the authorities in Gothenburg, Sweden. But where are they from? Haiti? West Africa? South America? There are stories about an inquisition, too! Allegedly, these goat-worshipping, non-Christians were persecuted by an army of God-fearing crusaders. Their village was burned to the ground, but they survived.

Or could there be truth to the rumor about an ancient voodoo tradition that can be traced back to Korpolombolo, a small and very remote settlement way up in northern Sweden?

Whatever the real story behind the enigma that is GOAT, the power of their voodoo rituals can be heard and felt on the highly sought-after Goatman 7″. In the meantime, a couple of clips have surfaced on YouTube that testify to the band’s fearsome hypnotic power.

A power that only will grow stronger, deeper and more palpable with the release of GOAT’s debut full length, World Music. The album will be out on Rocket Recordings on August 20th. From the tremendous Afro groove that defines the album to the killer fuzz wah guitars, Turkish rock, kraut repetition, astral folk, head-nodding psych and stonking afro percussion, this record will undoubtedly add to the group’s mystique. Call us worshippers! Call us insane! Skeptics, beware! GOAT will convert you! You will worship at the altar of the Goatman! There is no escape…