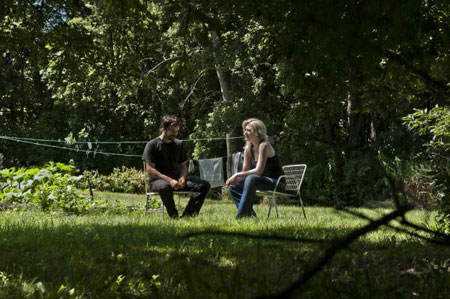 As the release date for the brand new album fast approaches, West from A Whisper In The Noise has created a video for the beautiful album track ‘Your Hand‘. What is interesting about this video is that it is filmed at the farmland where he resides and where the album was recorded, therefore giving a real sense of context to the music and you can view the video below.

The Minneapolis-based group formed in 2002 by West Thordson, who grew up on a large patch of farmland in the rural Minnesota town of Hanska (population 406). As an adult, Thordson moved into the abandoned elementary school he attended as a boy, where he composed in the music room in which he had played as a child, wandering the empty halls at night.

This dark, dramatic sense of loneliness and solitude is channeled into the unique and darkened sound A Whisper In The Noise have become known for. On the subject of the new album, which has been nearly two years in the making, West states: “most of the material was built on moving forward from my extremely negative grievances from the past.”

Interestingly, on this new record, other band member Sonja Larson has become a more integral part in the creation process as she not only plays violin but adds voice and songwriting skills to the whole album.

For this new record, A Whisper In The Noise have approached songwriting by drawing upon influences not only from other music (they reference Philip Glass, Roger Waters and Arvo Part) but from nature and in particular its power and atmospheric sounds.  The result is a coherent and focused album of true, honest music, shining by it’s purity and cinematic waves of sound. To Forget is music to sink into and become part of the listener’s emotional landscape.

Lovers of slowcore and especially fans of Low will surely find lots to love about the brooding and dark sounds of A Whisper In The Noise and you can purchase your copy of To Forget from Exile On Mainstream Records HERE.