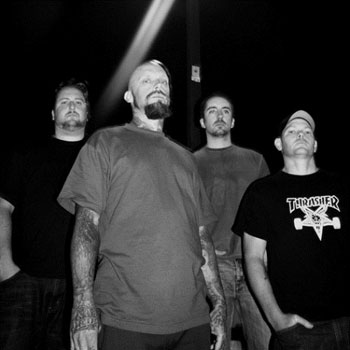 Los Angeles, CA misanthropic sludge-rockers -16- have revealed a brand new song from their highly anticipated new album Deep Cuts from Dark Clouds. The song, entitled “Ants In My Blood Stream” is streaming via Pitchfork at this location.  Deep Cuts from Dark Clouds, the group’s most pissed-off, vitriolic recording to date was recorded in late 2011 at Double Time Studios in San Diego, CA with producer / engineer Jeff Forrest.  The record will be released via Relapse Records on CD/LP/Digital in North America on April 24th 2012 and May 7th in Europe, with pre-orders available now at this location.

Additionally, -16- will be shooting their first music video with director Tyson Montrucchio (BRUTAL TRUTH, CATTLE DECAPITATION) next month for the song “Her Little “Accident”“.  That song can currently be streamed below while more details on the video will be announced shortly.