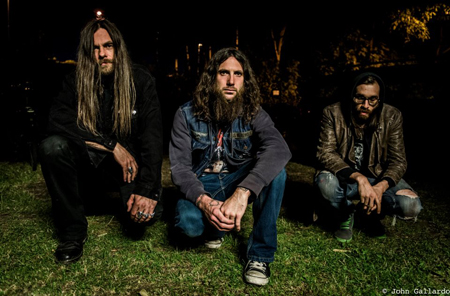 After one jam on 11/11/11, members of Ramesses (Adam Richardson and Mark Greening) and Bong (Mike Vest) conjured a new band which they baptised as 11PARANOIAS. Now it comes with great delight to introduce their debut recordings via their spiritual home, Ritual Productions.

In an exclusive interview for Metal Hammer about the demise of Ramesses, Adam Richardson revealed more about 11PARANOIAS…”It’s definitely more psychedelic rock and it’s still experimental and a bit crazy, but it’s a bit less Ramesses. It’s less aggro, but weirdly there are few parts that surpass even Ramesses for heaviness, which does make it a bit of a weird one. We weren’t planning that but it just came out, and some stuff was ridiculously heavy, other stuff just sounded really tripped out and spacey – a 60s/70s psychedelic rock sort of sound.”…he continues…”11PARANOIAS is going to be combination of Loop, Monster Magnet and Hawkwind, plus of course a bit of Ramesses and Bong. Those last two just basically equal the original three culprits plus ridiculous heaviness, whist bypassing having to sound like anyone else. It does sound fucking out there.”

Anyone who listens to this record will attest to the ridiculously heavy riffs and baselines, none more prominent than on my personal favourite track ‘Reapers Ruin‘. The freedom of expression and experimentation are particularly fluid throughout ‘Ossuaries‘ and ‘Deceiver Of The Deep‘, with dark psychedelics at play on ‘Inside Eusas Head‘. These are just the LP tracks too, the CD contains extra bonus material. The LP is adorned by a terrific screen printed cover, rendered by Adam Richardson.

The synergy between the three musicians is perfectly captured on this debut, and is proof enough that 11PARANOIAS have something unique to offer. One thing is certain, we need them right now!

Now stream ‘Deceiver Of The Deep‘ below for a taster of what this album will bring.