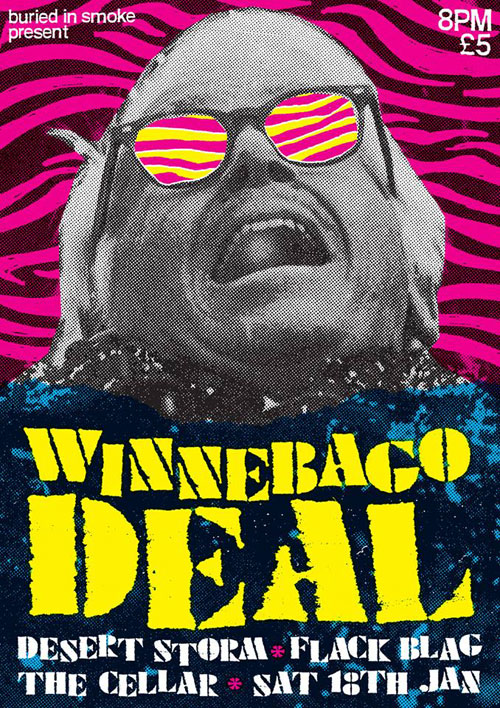 It’s been two years since Winnebago Deal played a single gig. Two. Damn. Years. This couldn’t be right, could it?

This is a band who have earned legendary status since the late ‘90s on the UK underground. Their balls-out combination of punk rock, stoner-edged thrash and straight-down-the-line heavy rock famously blew Fugazi off the stage at the London Forum back in 2002. Since that volume-defining show they’ve played with everyone from Motörhead to Mastodon and even toured Australia as Nick Oliveri’s heavy-handed henchmen in Mondo Generator. But a constant struggle to fill out venues on their own tours and the complete lack of support for their last album, 2010’s aptly-titled ‘Career Suicide’, found the ever-present duo of Ben Thomas (drums) and Ben Perrier (guitar, vocals) disillusioned and distanced from years of relentless gigging. With Perrier since forming the (it has to be said very similar-sounding!) band Blasted, it truly seemed that the ‘Deal was done.

But if there’s one thing I’ve learned about Oxford’s collective devotees to The Riff, it’s that they stick together and never fail to forget their friends, their good times and their great bands. Following much persistence, the hometown and Desert Storm-affiliated Buried in Smoke Promotions made a call last November – the Bens were booked and once again back to take care of business! Fast forward to January 2014 and yours truly is one of a great many crammed into The Cellar in Oxford; a tiny dive bar in the centre of town with a great sound quality as well as the feel and smell of a rock n’ roll venue as underground and intimate as could be. 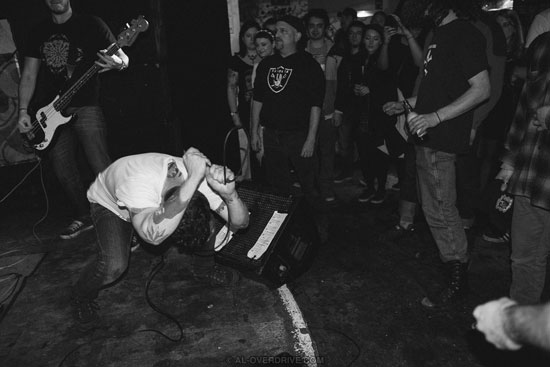 It wouldn’t be a classic Winnebago Deal gig without their infamous Black Flag tribute-act Flack Blag opening up the show. This time around the incendiary collaboration involves both Bens (Thomas on drums, Perrier on lead guitar) ably assisted by the ever-solid Paul Morrill (bass, also of Gunnbunny), the imposing Rusty Needles (vocals, also of Degüello) and Max Higgs (vocals, also of Mondo Cada) the latter of whom commands a stage presence that Henry Rollins himself wouldn’t snort at. With The Cellar already packed out at just past 8pm, the four-piece hammer into a spitting and raging 45-minute set with the immortal ‘Rise Above’ as limbs, egos and beers already start to splatter around the pit. Higgs and Rusty Needles trade the microphone neatly – Higgs handling the mid-era Rollins material with guile, wretched angst and an eye-popping bawl, Needles predominantly handling both the earlier ‘Damaged’ material and some of the later classics with ever increasing aggression and power. Perrier’s loose, sinisterly feedbacking guitar is a perfect foil for Thomas and Morrill’s chomping, tight rhythm chops as the ensemble batter through the likes of a tantric ‘My War’, a thrilling ‘Nervous Breakdown’ and the ever-poignant ‘Slip It In’. The crowd lap it up and continue to go suitably barmy well after the amps are switched off. Great fun and a quality warm-up act!

With the bar becoming some kind of forbidden oasis hidden behind swarms of punters, it’s a good job that we don’t have long to wait for Desert Storm. Oxford’s perennial rockers are beginning to outstrip their longstanding “the UK Clutch” tag and move away from their traditional stoner-rock consistency into more altogether heavy-metal territories. Still, it’s refreshing to hear the familiar bounce of ‘Shadow of an Eagle’ open things up and get toes tapping and arses shaking in the audience. There’s a lot of new material on show tonight as guitarist Chris White leads the talented five-piece through riff and riff after riff of COC-meets-Metallica-meets-The Sword crunch. Commanding frontman Matt Ryan banters well with the audience and his whiskey-drowned roar is met with pumped fists and shit-eating grins from sound-booth to stage-front. Closing out with the almighty thunderclap of ‘Enslaved in the Icy Tundra’ reinforces the notion that every time I see Desert Storm, they get that little bit tighter, more comfortable in themselves and slightly more inventive with their muscular metallic ramblings. 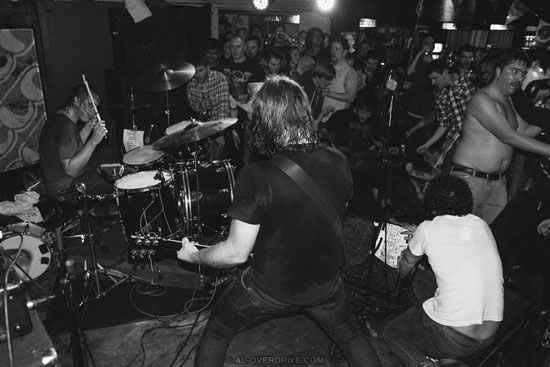 Tonight was really only ever going to be about one band however and as Winnebago Deal hit the stage to a hero’s welcome return, two things become very clear:

1) Oxford has missed their sons of vitriolic, no nonsense riff rock more than I ever thought possible
2) There are some exceedingly drunk people in the same room as me right now!

“It’s been a while…!” sniggers Ben Perrier into his mic seconds before the bruising duo clatter headfirst into a raging ‘The Line-Up’. From the very first crash hit, the room explodes: bottles, bodies, cans, sweat and euphoria flood the room as the drunk and merry smash each other to smithereens and the sober run for cover. The sheer power of the performance of just two men beating the living daylights out of their instruments for 60 minutes is simply jaw-dropping as the pair both give and demand every kilojoule of energy the Cellar can muster. There’s simply no let-up as Ben² slide seamlessly into ‘With Friends like These’ and its partner-in-crime track ‘Reeper’ whilst audience members fly across the stage, the floor, the instruments and the amps alike. There’s simply not enough room in the Cellar for this type of crowd behaviour, yet it’s so much fun to watch that no one gives a flying fuck just how close those pillars and ceilings remain to the ankles and forearms smashing into them.

The incredible buzz and Perrier’s barked growl of ‘Whiskey Business’ off 2003’s classic ‘Plato O Plomo’ record takes things up to a whole new level. Booze drenches the floor as people begin to crowd-surf themselves into the roof whilst 200+ adrenaline-wired Oxfordians bellow out that alcohol-baiting anthem of a chorus.

Yes, the ‘Deal’s songs are eternally simple and yes they are a succinct set of repetitive, no frills guilty pleasures, but Sweet Spine Christ, you will never find another band this tight in their execution, as unwavering in their aggression or as bone-jarring in those pedal-triggered bass-amp bursts which seemingly lie around every corner. Ben Thomas pummels his kit like it’s killed his whole family (which is no mean feat after playing an entire Black Flag set an hour earlier) and the likes of the crushing ‘Flight of the Raven’, the diesel-swallowing ‘Afterburner’, the speed-addicted ‘Harold’s Dewlaps’ and the over-over-overdrive centric ‘Cobra’ sound simply deafening. Rarer lost classics like ‘George Dickel’ and ‘Takin’ Care of Business’ get a thorough dusting down, but there’s only place for one track off the criminally unrated ‘Career Suicide’ in the neck-snapping ‘Frostbiter’. 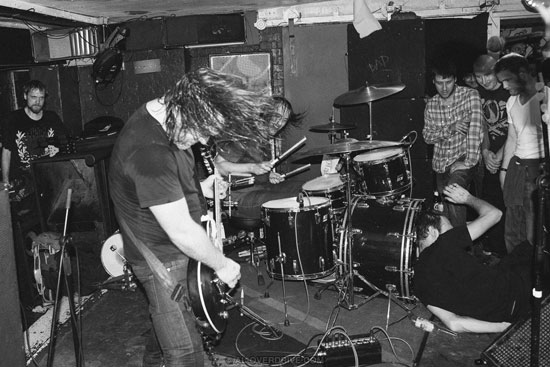 Tempos flare once again as Perrier announces the “fucking ironic song title” ‘Did it, Done It, Doing It Again’ as the Cellar’s bricks shake in their mortar and the temperature pushes the mercury to breaking point in the face of his never-ending onslaught of killer riffs. Somehow, the menacing and extended instrumental ‘Dead Gone’ is perhaps the pinnacle of tonight’s enormous performance as the entire audience bounce off each other like atoms in a particle collider with the band constantly cranking the dials upward. Segueing perfectly into their signature track ‘Manhunt’ and an encore of ‘Nitro Ground Shaker’ the place implodes; awash with broken people, broken ears and broken remnants of drinks receptacles as the pit beats itself into submission.

I’m not even from Oxford, but I could tell that this town’s noble army of rockers needed this incredible show and at the end of a hard week, frankly, so did I. Sure to go down in local folklore as one of the most outrageous displays of punkish brawling, bangover-inducing mania and head-chasming volume Oxford has ever witnessed, this was the most fun I’ve had at a gig in years. Watch out World, the ‘Deal are back and, as ever, they did it, done it and will surely be doing it again! 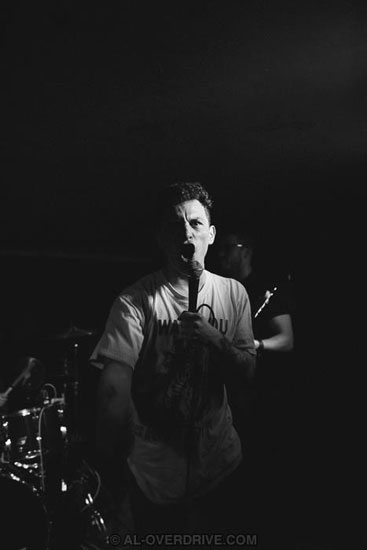 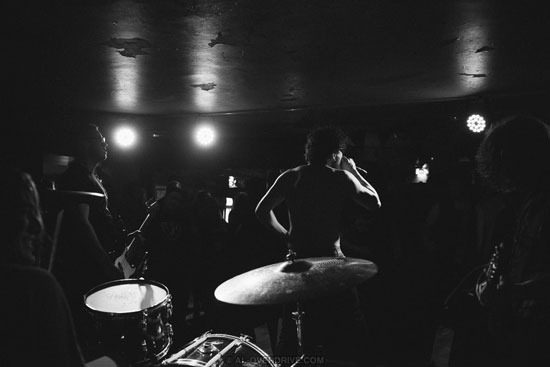 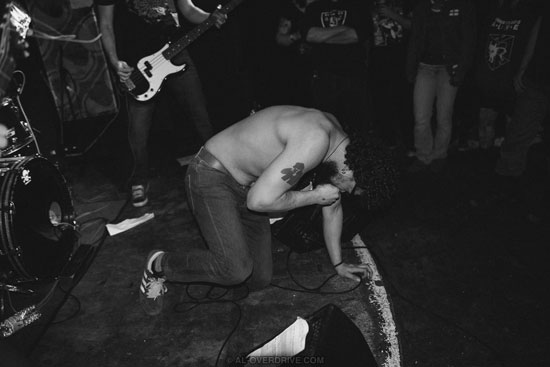 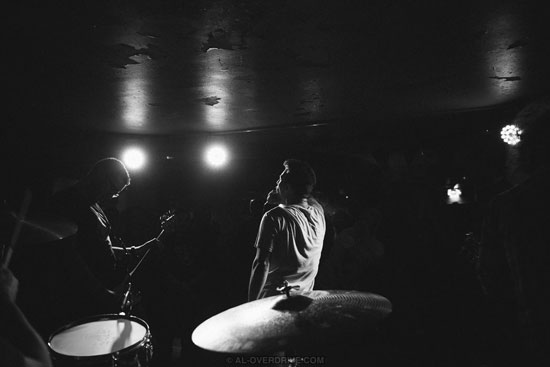 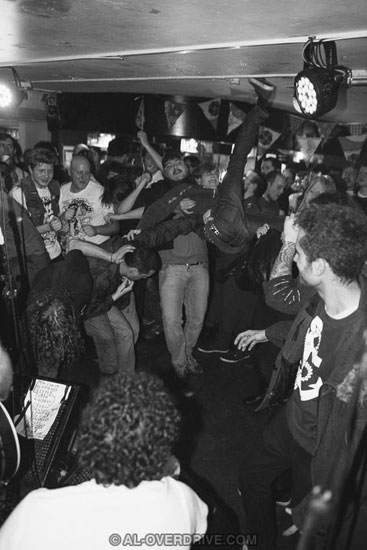 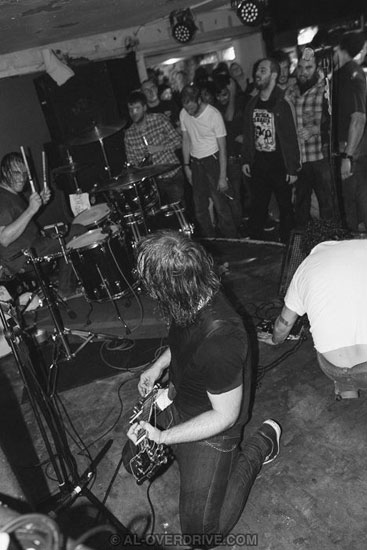 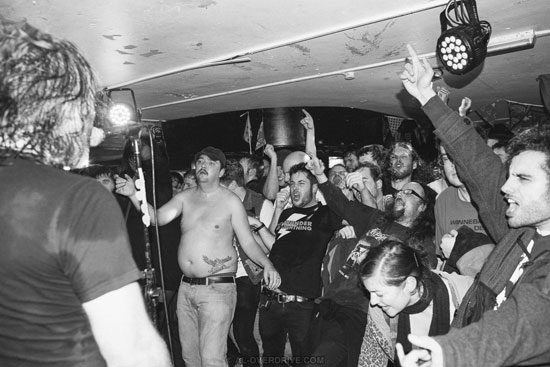 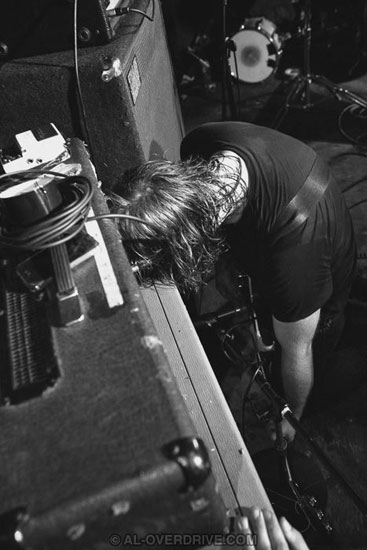 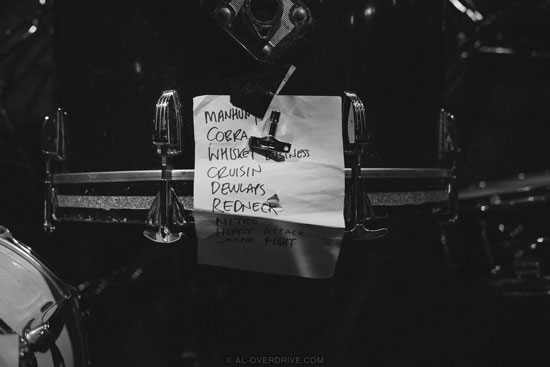 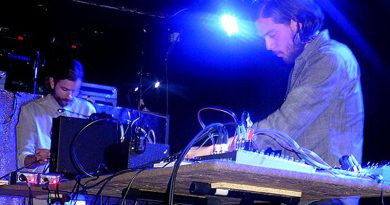 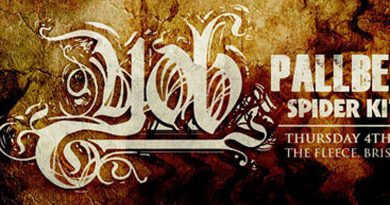 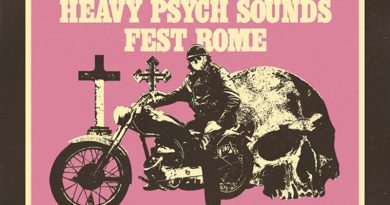