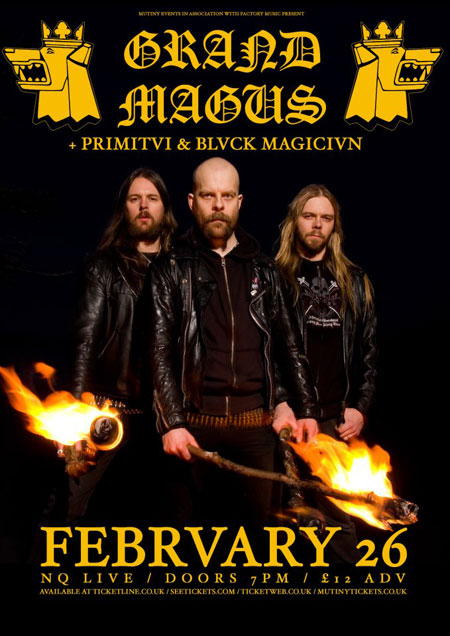 If there’s one band that are overdue a headline tour in the UK it’s Grand Magus. Having supported everyone from Amon Amarth to Cathedral it was time for a set which extended the 40 minute mark and included the obligatory drum solo.

Outside of the British Isles, fans of classic metal had the pleasure of witnessing Magus alongside speed heroes Angel Witch and Enforcer and looking at the UK’s support, it couldn’t be helped but feel a little disappointment.

Luckily Black Magician went some way to making up for this with a Cathedral heavy take on traditional doom. Their incredibly slow and drawn out riffing brought back memories of the sub-genre’s classic bands and made for a sombre yet satisfying introduction to events.

Black Magician proved too much for some of the audience who were after more mid pace boogie than slow motion vacuum but for those with more patience their short set made for exquisite listening.

Whippersnapping the younger side of the audience were followers Primitai. A modern metal band with the odd bit of old school proved a weird choice for main support, but gained a reaction out of the front even if the back were somewhat disillusioned.

Playing songs with cringe worthy titles like ‘Scream When You See Us’ definitely didn’t work in the band’s favour and it couldn’t be helped but noticed they were trying too hard. Supporting Evile this would’ve made sense, Magus, not so much.

The night’s headliners Grand Magus were never going to disappoint and coming on to a song from the film Conan the Barbarian was pretty fitting to the band’s metal might. Opening with fan favourite ‘Kingslayer’ was an excellent choice and got the crowd singing in unison, which is an impressive feat for a Tuesday night in Manchester.

Having recently released their Nuclear Blast debut ‘The Hunt,’ it was unsurprising to hear several numbers get an airing. Having an impressive Manowar like feel, songs like ‘Starlight Slaughter’ drew in older fans of the band and brought the newer ones out in a frenzy.

Few older songs were played but the thundering ‘Wolf’s Return’ in particular was a great example of how far Magus have come since their now more or less ignored but nonetheless fantastic earlier years. Vocalist/ guitarist JB Christofferson seemed overwhelmed at how much their fan base has grown and paid his thanks with a fantastic vocal delivery that still is among the best for modern bands.

After a drum solo which was there seemingly to give the other members a rest, Magus launched in to their last three tales, closing with a triumphant rendition of ‘Hammer of the North.’ This song got one of the best receptions of the night with a powerful howl from the audience providing one last surprise for the band.

With an absolutely storming set and an unhealthy amount of mid-week beers drank the cravings for the wolves to return has already begun. 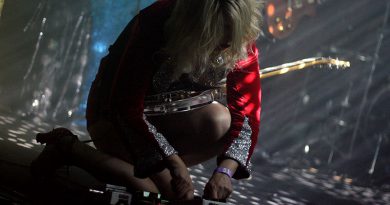 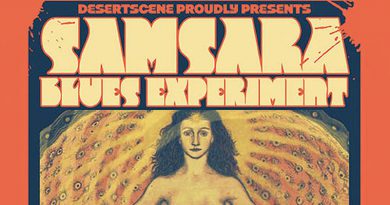