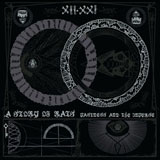 Offhand I can think of a few stories of rats, with the most enjoyable being that written by the old man of Providence himself, but this Story Of Rats is an entirely different proposition – albeit still a kindred spirit to Lovecraft’s tale due to the sense of creeping dread and cosmic iciness firmly embedded within its expansive, cycling drone and inhuman croaking.

Essentially the work of one man named Garek J Druss, A Story Of Rats may be familiar to those of you who bought their split LP with fellow Seattlites Pussygutt – now more commonly known as Wolvserpent – that was released on Olde English Spelling Bee back in 2007, but just in case you missed it, I will remark right now that although the name may be unfamiliar you would do well to pay attention as Vastness And The Inverse would be a very fine addition to the collective record collection of anyone with a penchant for experimental sounds, drones or just slow and – atmospherically – heavy music in general.

Boasting two side-long tracks, ‘Her Teeth Are Nil’ and Huldrefolk’,Vastness And The Inverse is an aptly named piece of work, being both cosmic in scope and feel and microscopic in attention to detail. Very much moving along similar paths as recent releases by fellow traversers-of-the-darker-corners Locrian, A Story Of Rats build their sound across time, layering tones incrementally and subtly in order to present what is very much a three-dimensional sound-image.

Growing from a starting point of minimalist percussive bludgeon, distant vocals and layers of droning, shimmering and slowly writhing electronics ‘Her Teeth Are Nil’ builds organically very much at its own pace, dipping down into a buzzing, fizzing thrum that threads through planes of time-stretched sound that drips with cold, outer-isolationist dread before bringing everything crashing back in at once in an overwhelming display of barely restrained force, like a great ocean wave breaking against the face in the slowest of motion.

The slow thwack of the drums joined by splashing cymbals, croaking howls from deep within the void and a central spectrally ebbing and flowing melodic drone that comes ever more to the fore.

Make no mistake, ‘Her Teeth Are Nil’ is HEAVY, but not in the conventionally accepted sense of things. No, this is cosmically, universally heavy, as vast as the glacial bloom of a new galaxy and just as colossal.

On the flip, ‘Huldrefolk’ takes a broadly similar approach for the most part, coming in on a hazily kaleidoscopic miasma of drone this time and having the main body of the track come in woozily, as opposed to the more forceful approach shown in ‘Her Teeth Are Nil’. Indeed, ‘Huldrefolk’ is characterised by a more languid approach in general, and a central musical motif with a more ‘devotional’ bearing, having a similar tone to that of a church organ, and a less visceral vocal approach. A more forceful approach is shown at the mid-point, when a more regimented drum part kicks in, but for the most part the pace and feel here is most definitely erring toward the ‘woozy/hazy’ side of things.

I can personally attest to the mind-altering powers of ‘Vastness And The Inverse’ – having listened to it from one end to the other intently and at high volume on headphones on a number of occasions, I found myself afterwards having experienced lightheadedness, disorientation and the distinct feeling of a loss of an unquantifiable amount of time.

Rats in the walls is one thing, but rats in the brain?