In March of this year Yawning Sons, the collaboration between British Instrumental band Sons Of Alpha Centauri and Californian desert rock icons Yawning Man, followed up their 2009 masterpiece Ceremony To The Sunset with the supremely beautiful Sky Island. Despite the twelve year gap between releases, the musicians involved proved that the debut was no one off fluke by blending seven tracks of stunning instrumentals with guest vocal spots from Dandy Brown, Wendy Rae-Fowler, Scott Reeder and the bands own Marlon King and Mario Lalli to create a record that not only recaptured the magic of the first one, but looks to surpass it.

Against the backdrop of the album release SOAC/Yawning Sons bassist Nick Hannon took time out to chat to me and shed some light on several topics including the birth of the project way back when Sons Of Alpha Centauri recruited guitar maestro Gary Arce to record their aborted second album, the recording process for Yawning Sons and what it’s like to have recorded a classic album.

Yawning Sons was born from you inviting Gary Arce to help with the second Sons Of Alpha Centauri record which morphed into something very different. How did this collaboration come about? Did you have a previous relationship with Gary or was it because you thought he could lend that missing quality, and if yes what was it?

We were already familiar with Yawning Man clearly, but it was when Dark Tooth Encounter dropped that we actually thought about inviting Gary over. That album has a mixture of awesome beats and some really interesting guitar parts. It was interesting as it was more like Pell Mell and Scott Reeder and Mario Lalli. That drove us into thinking that Gary could approach our material with a slightly different stance. Rather than just go straight into a second album, we thought it would be a great opportunity to share ideas and explore some of Gary’s unique production approaches to his guitar performances and song writing.

we’re really glad that it has got a cool reception…

Yawning Man and SOAC are both incredibly versatile bands that eschew vocals to allow the instrumentation to give voice to their visions. So why did you want to bring in vocalists for this project? Was it deliberately to set it apart?

I think so. Plus, it gives us the opportunity to ensure that it shapes Yawning Sons as its own thing. I think that’s why we worked hard to ensure that the vocal line up for Sky Island was consistent with the debut.

Marlon King gives a spectacular vocal performance on this record, how and why has it taken so long for this to appear? Is it a tool that you will use in the future with SOAC, or have you shied away from this for a reason?

In the name of experimenting, we went for it and we’re really glad that it has got a cool reception. I think that it has given us some confidence about the inclusion of vocals which actually could pave a really interesting new approach for us potentially…

Being a transatlantic act how does the writing process work as both of your main band’s songs feel born out of the chemistry of playing together, jamming and improvising, so were song structures worked out in advance or did it just flow while in the studio?

It is so genuine to me in the fact that the tracks are born completely through passages of jamming and then refining the structures loosely as we go. For example, Cigarette Footsteps had three or four recorded takes so that was a more intense writing and structured performance. However, Limitless Artefact was a fluid performance and really seamless in how it all integrated. Gary is a well of harmonies, but similar to Yawning Man he links in with the bass. I usually have a handful of bass lines ready to go – Shadows And Echoes was cast off a bassline like that. The way Gary and I link in is part of the key together with Marlon’s ability to reinforce, develop and accentuate the performances.

And speaking of studio time, how was the experience travelling over to Joshua Tree and recording the album in Desert Sky Studios?

Yeah, really cool. It was good to go over there this time around and fully immerse in the heat and sear of the desert. Clive Wright, who engineered the album, lives really off the beaten track and there were quite literally no tracks to his house. The scenery was unreal – there was a huge formation of rocks outside and is pretty much within the Joshua Tree National Park. Really inspirational and we captured and distilled that vibe into the record for sure.

Yawning Sons captures a similar vibe to Yawning Man’s laidback desert rock, which is unsurprising given their involvement, what do you think cremates this vibe – is it the people, the place or a mindset that is shared by the musicians?

I think that it’s the approach to writing music in a flowing and organic way. It’s kind of like jazz – like minded players, who can weave and be fluid in terms of compositions. We all know where we’re going but we like to take performance detours. We definitely share a vision around performance and the way that Gary and Marlon exchange and almost ‘talk’ to each other during their respective guitar performances is phenomenal.

You finished recording the album in 2018. Why did you decide to wait until 2021 to release it – band schedules, global pandemic?

Getting all of the vocals lined up took a while across all of the various schedules, plus of course Yawning Man had a record come out and tour and then we were focused on Buried Memories. Marlon mixed this record too and he spent a long time on ensuring that it was a specific ‘Yawning Sons’ mix that was consistent sonically compared to Ceremony... I think a lot of time was spent ensuring that the record matched and, in many ways, exceeding the debut. After ten years, we had to ensure that the sophomore was a fitting Yawning Sons chapter and aimed to build on, and enhance, the foundations of the first record.

When you look back on Ceremony To The Sunset did you imagine that work would become considered a bona fide classic?

Definitely not and it’s weird to hear it perceived as that! When Will Mecum from Karma To Burn came over and we did the Treasure Cat record collaborating together and after that went really well we basically replicated the approach with Gary. I think that the difference was that Will would drill the tracks we wrote and recorded three together, whereas with Gary was a lot more fluid. Hence, we were able to lay down a whole album based on concepts and ideas.

After ten years, we had to ensure that the sophomore was a fitting Yawning Sons chapter…

I remember when we talked about the portmanteau of bringing the Yawning and Sons together, I did think that what we were doing was pretty unique and a special take on the collaboration. I guess that the jump from unique to ‘classic’ can only determined by the audience and their commitment to it, so we’re eternally grateful to the supporters of the band for that.

Have there been any talks about album number three, or is it a case of no specific plans and you’ll know when the planets are aligned?

For sure. I think that the response to Sky Island, and the commentary around it, reaffirms that Ceremony… was not a one off and that the integrity of the band, and our compositions, are consistent and unique to the sound we have curated in collaboration. I can’t say when it will be of course, but I am very hopeful that the critical mass will always be there to support a new album and the next chapter.

Really appreciate your interest and amazing support to the band. Thank you! If anyone wants to check the band out then best place to find us is probably at our Bandcamp. 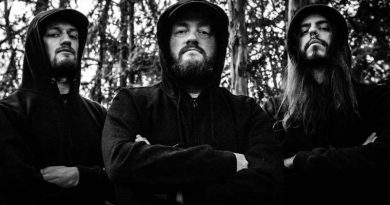