If Marc Urselli’s name isn’t immediately familiar, his client list will be. He’s recorded or mixed work by Nick Cave, Mike Patton, Aborym, Secret Chiefs 3, and Kayo Dot. He’s been John Zorn’s go to recording engineer since 2007. He’s played in a trio with Stephen O’Malley and Tim Wyskida and in a quartet with Lee Ranaldo, Jim Jarmusch, and BalazsPandi.

Marc, along, with co-executive producer Matt Bacon, is currently working on a project called SteppenDoom, which will bring together the heaviest guitarists you can imagine with throat singers from around the world. I caught up with Marc via email to discuss low heavy vibes.

How did the SteppenDoom project come together?

SteppenDoom is a project I conceived almost 10 years ago when I decided I wanted to make a doom metal record. I had acquired a 12 string electric bass and the instrument had such a huge sound, rich in harmonics and humongous when distorted, so I started writing the skeleton of these songs with that instrument. Doom metal is one of the genres I grew up with in my teens (Sabbath, Paradise Lost, My Dying Bride, Type O Negative,etc… were all major influences) but I also have always had a big fascination with world music, in particular throat singing. I’ve always thought the two genres have a lot in common so I decided to bring them together in one project and build this cultural bridge between two worlds that are geographically and stylistically miles apart.

I had acquired a 12 string electric bass and the instrument had such a huge sound, rich in harmonics and humongous when distorted, so I started writing the skeleton of these songs…

Can you tell me who’s involved so far?

How did the writing process work? Did you have song ideas sketched out or did you give people free reign?

I wrote all the songs on my 12-string bass and then I added drums. Once I had drums and bass, I gave everyone free reign. I think the best things come out of letting people do what they do best, with freedom. You give them a frame of reference and you let them be themselves. I never want to be one of these producers who hires people and then ties their hands behind their backs. If I get somebody on a record it’s because I want their sound, ideas, vision and their musicianship.

How many of the doom musicians were familiar with the throat singers’ work and vice versa?

I wouldn’t know honestly. Sadly because of the distances I’ve only met a few of the throat singers in person and there is often a language barrier so it’s not exactly something I’ve asked them. Some of them don’t even do email.

These are very separate worlds for the most part (which to me is the challenge and the great appeal here!) although I am sure people like Albert Kuvezin (Yat Kha) would know a lot of the metal players and I am sure most people know Alash Ensemble or Huun-Huur-Tu because they are pretty famous groups even outside of the world music scene.

What’s your approach to mixing material recorded in so many different locations?

It’s the job of a producer to find a common thread and to weave that thread to create the tapestry of sound that makes the fabric of the record. I’ve learned a lot about this working with the great Hal Willner, who was one of my mentors and was famous for putting together artists from the most distant spheres and making it all work. I strive to do the same and everyone who has heard this record so far was blown away by how well the various combinations of artists work together.

Does throat singing present any special recording or mixing challenges?

Yes it does. There are a few different challenges, the biggest one being making sure the overtones don’t get lost in a mix where there is so much low end already and making sure the harmonics of my bass don’t clash with the distorted guitars. Then of course there is also the challenge of making room for everyone in a very dense mix. But that is what a mixing engineer works all his life to do so I’m in familiar territory there.

Given your resume, I’m sure a lot of readers would be curious to hear your ideal doom guitar recording setup.

I don’t have an ideal recording setup in the sense that, as a producer and engineer, I strive to capture the sound of the artists I work with, every artist has a different setup, a different idea of what they should sound like and I appreciate and respect that. Some are purists and use stacks of amps, others have moved into the modelling world and use Kempers and Fractals, others are somewhere in between.

Steve Von Till was one of the first on this project and he sent me loads of guitar tracks and ideas, you can tell the guy lives and breathes these things…

It’s been a treat to get tracks by people who really spend hours tweaking their tones to get the best out of their rigs… Steve Von Till was one of the first on this project and he sent me loads of guitar tracks and ideas, you can tell the guy lives and breathes these things. Johannes Persson also sent me great tracks with multiple cabs/amps and took his song in a direction I hadn’t even anticipated, which is thrilling. Lori S. sent me different amp heads and room mics, to give me options and as a producer and engineer I appreciate having all that room to maneuver.

When can we expect to hear the SteppenDoom album?

I don’t have a release date yet. Matt Bacon of Dropout Media is co-executive producing the album with me and together we are looking for a label. We have had some interest but are looking for offers from labels and will plan to release it in the fall or spring hopefully. 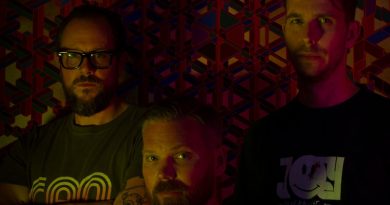