Since late 2006, Choking Hazard Records have been gaining a firm strangle hold on the unsuspecting underground, starting out life within the punk fraternity, it wasn’t long before this behemoth slowly started to crawl into the darkened dirges of Sludge & Doom by supporting bands such as Ghäst, Moloch, Sollubi and more recently Fistula, intrigued to know what else lurked within this chamber of horrors, I caught up with label founder Steph.

When did Choking Hazard Records form and besides yourself, who else is involved?

I started Choking Hazard Records at the end of 2006. Before that, I was supposed to help a guy run his label, he released one hardcore punk 7″ and he didn’t have enough money to release his next projects. I was very excited about the idea to run a label, his proposition was cool until he told me that he wanted to stay the boss and that he would probably want to continue the label alone after 5-6 months. I told him to eat shit and i started Choking Hazard haha!! He stopped his label 1 year after that! For this reason, I prefer to be alone in my new project!

What have you released to date?

When I started Choking Hazard, I was in a punk hardcore mood. I contacted 2-3 bands that I discovered during my 2 weeks with the other label. Antibodies ‘Concrete Rockers Go Uptown’ 7″ (UK) , The Spears ‘People Are Bad’ 7″ (Florida, ex-Hated Youth, Pink Lincolns and Down By Law) & Gordon Ivy and the Jaybirds ‘A Midnight Rave With The Jaybirds’ 7″ (Japan) was my first releases. I had problems with Gordon Ivy, their lack of respect and attitudes pushed me to destroy all the remaining copies 2-3 months after their 7″ get released haha! 600 copies of 1000 got destroyed! It was fun and it was a deliverance to have nothing to do with them anymore, they’re some assholes!

After that, my friends were ready to release their first CD, this band called Ghäst asked me to co-release a split Ghäst/Yoga with the drummer’s label called T.D.S Records. It was very limited and it was a good way for me to bring Choking Hazard in the doom way. After that I asked Moloch to release their 10″ on CD. It was more easy for me to make my way in the doom/sludge scene than the punk hardcore scene. I released 2 bands from Québec, Inertiakills – Discography CD and Immoral Squad – Damned CD, it’s 2 bands I listened when I was younger, I was really glad to release both CD’s. After that, I took the decision to stay in the sludge / doom scene, it’s my favorite one anyway. I released Sollubi ‘At War With Decency’ CD, Fistula ‘We, The Beast’ CD, Jucifer/Show of Bedlam – Split CD and my double CD compilation called ‘The Stranglers’.

Your releases span a broad range of music from Punk, Hardcore, Grind, Noise & Sludge so with this in mind what is the ethos of Choking Hazard?

I listen to a lot of different kinds of music, I’m into doom, sludge, grind, powerviolence, punk, hardcore, noise… I can explain it in 3 words… SLAP A HAM!!!!! I want to keep my label in the old school way, in the spirit of Slap A Ham, Bovine, Prank and Deep Six! Feast Of Tentacles and Shifty are 2 great current labels, I also like Crucial Blast records!! Land’o Smiles is great too! I run my label in the same way as them. 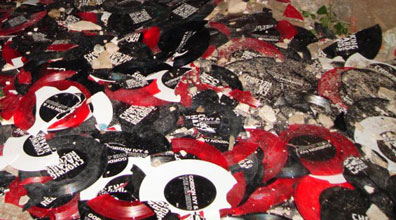 How do you decide what does and doesn’t get released, for example do you approach bands that you like with an offer, or are you now at the point where bands are approaching you?

I only want to release bands that I really like. I don’t want to release bands only because it would sell very fast because their popular, if I don’t like it or if they’re pretentious. I only want to deal with people who are seeing the music like me. I’m lucky, all the bands on my label are really cool and are doing music for the good reason… except Gordon Ivy haha! Almost all the bands I asked for a release said yes, i’m really lucky for that.

How easy/difficult have you found it to get your releases not only noticed and reviewed, but also distributed both in your native Canada and worldwide?

For punk hardcore, it’s hard to make my way from my home, but for doom and sludge, it’s more easy… I don’t know why, maybe because the scene is smaller.

Your releases tend to be CD only, so would you, or have you ever considered dipping your toes into pressing vinyl?

My first 3 releases are 7″. I’ll try to release an LP in 2010. I like vinyl’s but it’s more expensive and I got a lot of projects, it was more easy for me to release on CD’s. I’m excited about my first LP. It will probably be the Fistula/Ghäst split LP. 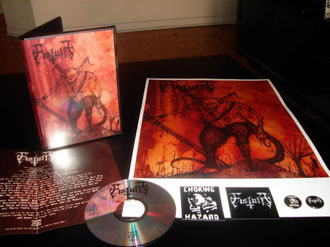 And to follow on from that, for the Moloch release you handled the CD version and while Feast Of Tentacles handled the vinyl pressing, so do you think this is something you will continue to do in the future?

I hope so!! haha! I asked Moloch to release their upcoming LP on Vendetta records in CD. i’m really a fan of this band!! It will be confirmed in the next months I guess. Doom/sludge fans prefer to buy vinyl, I’ll probably release more vinyl in the next months/years.

Can you explain the idea behind aptly named ‘The Strangler’ Compilation, who is likely to feature on future chapters and have you any idea when these will be released?

It’s a concept about strangling scenes from old horror movies, I got this idea with the name of my label, Choking Hazard, it’s not about the band called The Stranglers! Doom and Sludge bands transmit the same feelings that old horror movies do, it’s creepy & primitive with slow motions. Fistula, Ghäst, Haggatha, Black Market Ministry and Garadama are supposed to be in the second chapter, the other 3 bands will be confirmed later. I’ll try to release it in October 2010, 1 year after the first one.

What would you say has been your most popular release to date?

Jucifer/Show of Bedlam split CD and Fistula ‘We, The Beast’ CD are selling very well. The Moloch CD is almost sold out.

On average, how many hours a day would you say do you put into the running of the label?

1 or 2 hours, I really have fun to run my label, I don’t really care about the time I pass on it, it’s just fun!! Dealing with bands, labels and people who like music.

What releases do you have planned for the future?

I’m supposed to release a live CD/DVD of Noothgrush… That’s my favorite band by the way!!! I can die after this release haha!! Fistula/Ghäst Split LP is another exciting project. I’ll release the second part of ‘The Stranglers’ V/A. For the moment, Ghäst/Abandoner Split CD is coming up next. It’s the 3rd split of Ghäst and the first one with me on vocal. I’ll co-release it with At War With False Noise Records. In the same time, i’ll release Aquilonian/Sollubi Split CD. Both will be released in March or April. I’ll try to find 1-2 other projects for 2010… it’s the most exciting part about running a label except the moment you get a call from the pressing company to tell you that’s ready!! haha!!

And finally, what is your current playlist?

In the moment, I can’t stop to listen the Bastard Noise / The Endless Blockade Split LP!!! That’s the record of the year for sure!! That’s crazy!!! Ghäst have the chance to play with both bands in July!!! I can’t wait for this show!!! Lebenden Toten, Aldebaran, The Monks & the album of The Spears are playing really often in this moment. I got the 2LP of Shrinebuilder and the split 7″ Brutal Truth / S.O.B., that’s really awesome!!!

I would like to thank The Sleeping Shaman to be awakened about bands and labels. it’s really appreciated and we need people like you! Fucking cheers to you!!! 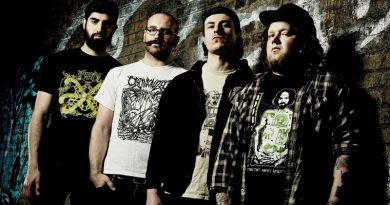 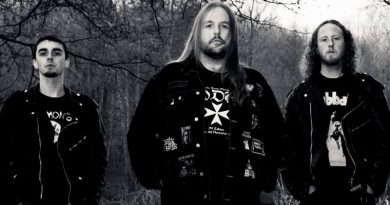 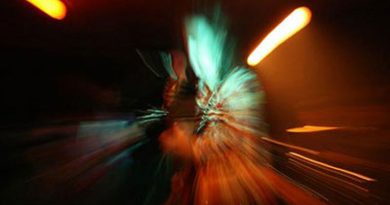