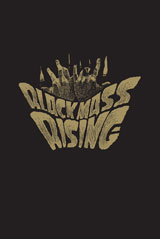 Filmed entirely on a camera-phone, this homage to Kenneth Anger’s classic experimental film Lucifer Rising is as much about the visual as it is the auditory, boasting a soundtrack composed of the crème de la crème of the dark side of the underground music scene welded to those hypnotic and oft-times chaotic images.

Divided into two parts, essentially a ‘light’ and a ‘dark’ part, Black Mass Rising is an abstract impressionistic stream of manipulated imagery and visual moods that synchs up perfectly to its soundtrack, creating, in some ways, almost a visual album.

With no obvious narrative to anchor things down, the film flows through a series of vignettes, often interspersed with one another or juxtaposed atop one another. From the heliopic and desert imagery we move through visions of churning, roiling molten lava, night-sky starfields and solar eclipses, and into the forest as the camera whirls around a circle of hooded and cloaked longhaired but faceless figures, as the sound of crunching beats and dirty psych floods the scene and time and space fold in upon themselves.

A veiled female figure in white cavorts outside a mausoleum in the final sequence, and as sinister echoing choirs play the veil is slowly removed by a pair of disembodied hands. The music, by Witch House supremo Mater Suspiria Vision, peaks but the veil is never actually fully removed – the film begins to run backwards before the face of the figure is fully revealed as the music takes on an urgent, paranoid complexion.

The Black Mass, the second part of the film is ushered in by ambient rumbling and sudden, stark sweeps and stabs of strings – courtesy of Portal member Horror Illogium – signifying a severe shift in mood. The music indicates that we are now in, for all intents and purposes, a dark place, a horror film, and the visuals shift in accordance.

All is now monochrome, black and white, or else completely negative, solarised. A bearded sinisterly hooded figure lurks in a cobweb encrusted abandoned building, choked with debris. The skies are dark and brooding as the camera stalks through a graveyard, capturing mirrored, warping crosses, fleeting glimpses of moss encrusted headstones and a figure holding a human skull aloft in the mouth of a tomb.

Dread clings to the visuals, accentuated by the sinister sounds in the air. Half-heard whispers, hissing noise and encroaching dread are conveyed via L’Acephale, Cultus Sabbati, Sum Of R and Kinit Her – musicians who deal in the darker strains and currents of the underground.

A bleached bone-white female figure picks her way through absolute darkness, shadowed by the pitch black tone of the insinuating drone and cloying noise that plays around her.

We roll across a black field, see a hunched figure enter a tomb, and see white hands submerged in a pool of deep, dark water like an obsidian mirror. Moss creeps across ancient stones and a pale blonde girl lies unmoving across a grave.

The coven in the forest return, darker now, as the sound of wolves or dogs fills the air, along with a mournful folk air and a mechanised churning. The increasingly harsher sounds of Aluk Todolo, Burial Hex and Menace Ruine are set to choppier editing, flicking between the coven, rippling water and the branches of trees as the sounds become grainier, more distorted. The final sequence shows the girl from the grave lying in the water, harsh spurts of noise from Demonologists drawing everything to a close.

Now, whilst there is much to admire about Black Mass Rising – the ingenuity and surprising quality of the fact that it was filmed using a simple cameraphone, the quality of the soundtrack and the vision of Shazzula Nebula for three – it isn’t perfect.

There are parts in which it veers far too much toward a vanity project – watching a black-clad female figure slowly wave her arms around at a camera for ten minutes at a time can be more than a little tedious, and, at two hours in length, it can drag a little as a purely visual experience – I can see people simply leaving it on in the background whilst simply listening to the soundtrack. Therein lies the problem – the film falls between two stools.

Lacking a genuine thread of plot or a journey of some kind means that as far as being a film goes, Black Mass Rising is a hard watch, but, as I said, at two hours in length, it would wear out the patience of even the most ardent admirer of experimental cinema, seeing as how many such films clock in at under an hour…so, what exactly IS this?

Is it an extended promotional film for the music involved, or simply a well put-together vanity project?

Tough call. I know I liked it as I watched it, but I also know I wouldn’t sit through it again. Ultimately, Black Mass Rising is a tough sell. Yes, you may well enjoy it, but I sincerely doubt it will get repeat views. The soundtrack, on the other hand, well, THAT I would listen to again.

An intriguing, well-executed but fundamentally flawed project then.