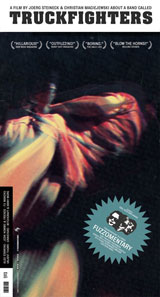 The rock documentary is a much abused format that can vary in presentation from live concert recordings that follow tours and show bands living the high life, playing packed out arenas and indulging in all manner of debauchery, grimy hard hitting ‘facts’ that can see band members full on brawling with each other as life on the road takes it’s toll or high profile bands acting like spoilt children who have lost all touch with reality and visibly losing the plot.

Truckfighters is a completely different beast again. Written and shot by Joerg Steineck, this ‘Fuzzomentary ‘ is a part scripted, part ironic and most definitely satirical film in the driest sense possible. Partially done to highlight the issues that confront a band that have to balance working and touring to survive, this documentary is both deadly serious and fantastically irreverent, including acknowledging that Sweden isn’t known for its deserts.

Running at 89 minutes and divided into nine chapters, the fuzzy retro style and lovely touches of honesty, beautiful scenery and stark reality that contrast with the full bore footage of the bands live performances.

The film’s narrative depicts the three band members from the town of Örebro, Sweden (who have all given themselves fictional names in an almost quasi Western homage, complete with narrator) as fairly normal guys who have day jobs and responsibilities that they shed to get on stage and rock out.

German writer and Director Stieneck along with camera man Christian Maciejewski takes his love of exploring counter culture and underground music and pours himself into making what could potentially be a very ordinary story and gives it a twist of the unpredictable and delivers a quirky, sometimes difficult, yet always entertaining documentary into ‘the greatest Fuzz band in the world’

The initial chapters fly by at a fair pace as they introduce the band in their everyday environment and contrast the seemingly mundane of family lives, their back stories and identities; the shop worker, the producer, the family man; all of which get forgotten when they step up onto the stage and lose themselves in the moment.

The joy that is felt is quite palpable and it speaks volumes about the three band members who have been trying to explain what being in a band means to them. For all the analogies that they can conjure in an everyday setting when they unleashed the music close up and personal in a club, leaping around the stage, getting in the faces of the audience and literally pouring blood, sweat and tears into a performance you can understand what fuels this dual existence and why the hard work and sacrifice is worth it.

It is clear throughout the DVD that Mr Ozo and Mr Danjo are the driving force behind the band, two guys who can have a laugh but know that in order for the band to succeed it needs drive and commitment. Less sure of this is Drummer Pezo, who half way into the DVD quits the band.

The fallout from this is at times funny, painful and downright voyeuristic and the toll of the frustration on Danjo in particular is acute as he explains the fact that his drummer failed to match the commitment to the band he has, his dalliances with drugs and lack of motivation… only for the camera to pull back and Pezo is sat next to him ready to record the drums for what would become their Mania album, preferring to be a session drummer.
As the scene goes on it is clear the respect the two members of the band have for their want away skin beater, but cannot operate under the pressure of having that lack of dedication.

This issue almost becomes the central hook behind the DVD as they struggle to fill the drum stool in order to get out and tour. Enter Paco, a guy who looked like he would be the ideal replacement, only to fall injured and have to leave. By the time Pezo rejoins having got his shit together there is a whiff of Spinal Tap about the band which is tempered by a healthy dose of honesty and realism as Stieneck focuses on the rigours of touring, in fighting, the physical toll on the body and the excesses of partying. Until it happens again…

Despite all these potentially heavy moments they are tempered by scenes of the band rocking out at festivals, experiencing amp breaks and impromptu jamming that shows them to not only be down to earth guys (well two of them anyway) but also accomplished musicians and road hardened warriors. The hardships of being in a band under the glass ceiling they have is forgotten by the section where they are out supporting Fu Manchu which almost gives you a sense that little by little the band are winning.

The last third of the documentary introduces various sequences that are surreal, not only ‘fuzzy’ but flat out retro dream/drug type sequences which lighten the mood and makes you consider that not everything you might have seen was as serious as it was suggested.

It is also at this point that various cameos start to crop up and it features short guest appearances by some famous friends and fans including Josh Homme, Alfredo Hernandez, Nick Oliveri and Chris Cockrell. Homme’s trailer advertising Truckfighters as ‘the best band in the world’ is a great piece of satire and a nice touch from a man who has grown beyond the desert rock scene.

From this point it is almost like everyone involved with the project let their hair down, the album was done, the touring was going and the ending is… it is mental, really fucking mental, like watching an acid trip at times that shows the band building and building on their success, tongue in cheek drummer issues, reels of headlines culminating in a gig on the moon.

It is a nice touch though and it is a feeling that sums up the band’s belief and work ethic. They are chasing the dream, one of these days Alice etc, they are doing this for the love, for the escapism and for the hope of success.
It is a strangely (and strange) heart warming ending that, after all the drama, the struggle and the absence of glamour, leaves you, well, fuzzy inside I guess.

The Extras on the DVD are fairly stand – not only do you get Homme’s trailer again, but you get a wealth of footage that was shot and cut from the film. There are interesting snippets like (Mr Ozo) Oskar Cedermalm’s many other side projects which displays that the guy works incredibly hard as he puts so much effort into Truckfighters and yet still has this untapped energy and creativity, all of which would detract from the flow of the documentary.

Overall Truckfighters is a great watch, it is quirky, strange and at times deadpan with it’s humour so it may not wholly grab you fully on the first watch, particularly for all the experimental elements used to emphasise to flavour the style, but it is a remarkable and interesting film about a band who work extremely hard and put their heart and soul into making great music.