2021 has been a strange fish hasn’t it? Not quite so dramatic as all of the doom n gloom of 2020, but also not quite back to normal. This lack of normality has perhaps been most acutely felt in the world of music, where the live scene has continued to be all but dead in the water. We’ve had a few stand-out exceptions, but for the most part, we’ve sadly been without the company of our friends from both the east and west of our fair isles.

Of course, this isn’t to say that new releases have dried up at all… quite the opposite… I’ve struggled to keep up with it all to be honest! So, here’s my ‘2021 best of the stuff that actually made it off my new music pile and into my ears’ list.

Effortlessly retro and cool; this debut EP from Wall is so full of charm that it has never been too far away from the top of my list. Their follow-up (also released this year) would also make it into my top 20, so not a bad year’s work! Is there any greater compliment than saying the Black Sabbath cover is the least interesting track on the record?!

Most of you won’t have heard of these aging New Wave of British Heavy Metal heroes, so I think it’s high time they got some exposure around here! Iron Maiden work tirelessly so it would be nice to see them play some bigger venues in the future as well… All joking (and ideas of what’s cool or not) aside, I bloody love this album.

So Bokassa are a band that have had their day in the sun, as they supported Metallica on a couple of legs of their European arena tour a few years ago. However, personally speaking, I only came across them this year. I’m not usually a fan of heavy music that has its tongue in cheek, but for Bokassa I seem to be making an exception. Huge riffs, great tunes, hardcore-style backing vocals, and trumpets!

Sci-fi doom?… Yes please. LLNN are hugely cinematic and head-shatteringly heavy. This is without doubt the most extreme album that makes it to my list this year. It’s an unrelenting but totally rewarding listen. Not an album to drive to as it really does demand your attention. Each and every time I’ve listened to Unmaker I’ve been totally engrossed by the end.

Well, this one was a surprise. Whoever thought that a record which echoes both Quicksand and Depeche Mode would work? Even as I type that it sounds terrible, but somehow it works! Sons Of Alpha Centauri’s Push definitely wouldn’t make it into my list of best produced albums of the year, but the songs and performances shine through regardless.

5. Warning ‘Watching From A Distance – Live At Roadburn’

This came like an unexpected love letter from the past. Having seen one of Warning’s shows on this tour first-hand I’m now so happy to also have the ability to relive it as many times as I like. I reviewed this for The Shaman a while back, and the main thing I said was that Patrick Walker’s voice now seems even better suited to these songs than it was when he first recorded them. Borderline genius!

The members of Shun have approximately 300 years of musical experience collectively (maths was never my strong suit) and it shows on this, their debut album. Shun reminded me exactly what was always great about the stoner genre. So not only have Shun given me one great new album, but they’ve also made me revisit a load of classics that had been gathering dust for a few years due to my becoming rather tired of the genre. All hail to Shun for unveiling the stoner that I’ve always been.

In all honesty, the three records at the top of this list are interchangeable in terms of who gets the top spot – they are all absolutely stellar. In discussing Torn Arteries, I could just say ‘it’s a Carcass album – of course, it’s good’, but at this point in their career this deserves some specific praise. The key thing about Torn Arteries is the significant shift in feel from their previous album Surgical Steel. The titles and the cover images tell most of the tale – the prior album is metallic and very precise in its delivery, whereas Torn Arteries is a much more organic sounding record. It has bluesy elements which we haven’t heard from Jeff and the boys before, and it’s all the more surprising for it. Whisper it… Torn Arteries may even give Heartwork a run for its money…

Of all of the bands that you’d say are currently active, Gojira are the one that I watch the most closely. Gojira playing live is something to behold, and until their previous record, Magma, they had a run of three releases stronger than anyone else I can think of. Happily, Fortitude is back up to the quality of those earlier releases. Gojira are no longer giving us sounds that are unexpected or particularly new (and yes, Amazonia is a full-on tribute to latter-Max-era Sepultura) but when the songs and the performances are so strong it really doesn’t matter. These four Frenchmen are still out ahead of the pack, and long may they continue.

It isn’t often that a new independent band come out of the starting blocks with an album of such strength that it gets played more than anything else. But that’s what Sheev’s Mind Conductor has done. Riffs? Check. Memorable tunes? Check. Great production? Check. Oh, and definitely the best artwork of the year. I’ll still be listening to this whilst I’m basting our turkey.

I’m not gonna mention any other 2021 releases – sadly for me the other notable incident from the last year was the untimely passing of the great Eric Wagner. From my fleeting but memorable meetings with him he was the definition of a gentle giant, and a real hero. So, my honourable mention goes not to the Trouble albums, but to the 2017 Blackfinger album, When Colors Fade Away. Lyrically it is maybe Eric’s very best and serves as a wonderful self-penned obituary. RIP Eric. 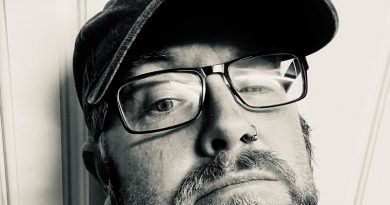