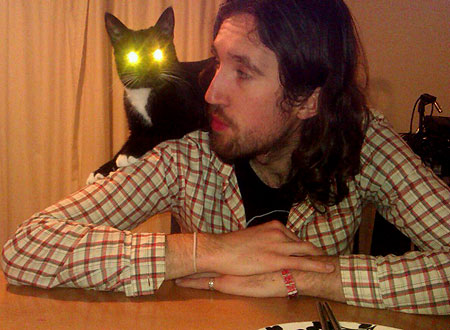 A Round-up of the Year that Failed to Destroy Itself

Those wacky Mayans, eh? Just like Nostradamus after them, they seemed to promise the (end of the) world but here we all are, still trudging through a dark winter’s day, broke, cold and full of malice. And while I, like all of the writers here at the Sleeping Shaman, am broke, cold and full of malice, I am also one of the few who answered the call, like some kind of Pavlovian chump, to attempt an end of year round-up. When head Shaman Lee came-a-knockin’ this time last year I’d only been writing for the Shaman for a few months and had only gotten a few reviews and features under my belt. I wasn’t as hugely engrossed in the scene as I am now, and while it may just be a sign of my ever-growing love for all things heavy, it really seems like this year has been a vintage one for the scene.

Seriously, how fucking good has 2012 been for heavy, alternative music?

We’ve seen well-established bands release career-defining albums and returning to action after long hiatuses, and we’ve seen a ton of underground bands come through the ranks to release demos, EPs and albums that have made a huge impact, contributing to an ever-growing scene full of top-quality musicians and noise-mongerers. And although we only have a few days left until 2013 (and the Apocalypse is looking less and less likely) the amazing music will stay with us for years to come.

Ever the festival of the calendar year, Roadburn 2012 certainly didn’t disappoint with a frankly ridiculous lineup of great UK and international talent that included almighty sets from the likes of Sleep, The Obsessed, Voivod, d.USK/dISEMBOWELMENT, Chelsea Wolfe, Conan, OM, Yob, Jesu, Bongripper and a stupid amount of others who I ought to be ashamed for not listing in full. The Jus Oborne-curated 2013 lineup is already taking serious shape and looks to continue Roadburn’s trend for setting the bar high for alternative, metal festivals.

A fantastic new festival also emerged on our own front door this year; in April Desertfest played host to Karma to Burn, Orange Goblin, Corrosion of Conformity, Church of Misery, Zoroaster and a who’s who of British stoner/sludge/doom bands across three venues in Camden. After the success of the 2012 event, the organisers have already starting announcing some impressive bands for 2013 including a host of reformed bands and Desert scene godfathers. Right on. Elsewhere Damnation Festival boasted an equally impressive line-up with Doom-stalwarts Electric Wizard, 40 Watt Sun, Pig Destroyer and Amenra. The ATP I’ll Be Your Mirror event at Alexandra Palace in May brought legends Sleep, Melvins, Harvey Milk, Slayer, Yob, Codeine, Mogwai and many more together under one (presumably worse-for-wear) roof.

But for many people the highlight of 2012 came late in the year with the return of Neurosis who released their tenth album Honor Found In Decay in October and played a triumphant co-headline show at the Forum with Godflesh in December, an event which many people – in an inevitable hyperbole-haze – presumed would bring about the end of days. For others, it was just another in a long line of fucking awesome shows that 2012 offered us.

Once again though it’s the quality of underground bands that have either emerged or continued to produce amazing work that really proves that the coming years will continue to be good for all of us. As ever, it would be difficult (not to mention foolish) to try to list all of the bands who did stellar work this year but the fact that the task would be so hard just shows the huge variety and quality of music being produced here and around the world.

I’m going to end this admittedly lop-sided round-up with a partial list of some of my favourite albums released this year (in no particular order). Feel free to comment/deride and/or discuss your own favourite releases on Facebook, Twitter or any other social medium or vacant wall.

But for now, whatever your creed, wherever you are, happy holidays everyone…

Rest in Peace Wiht and Dopefight.