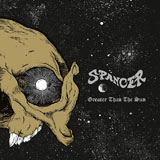 “We don’t give a shit what you, your mother or our rehearsal room neighbours and landlords think” reads a poignant paragraph on Spancer’s press sheet. Charming. It’s pretty oxymoronic actually, given that this simple document is in itself an item of promotional material, sent out with album sample CDs to music writers of all shapes and sizes the world over to try to build hype, convince potential record buyers and generally spread the good written word about the fruits of record companies’ loins. But no worries, I get it: the stance is aggressive, the music heavy, uninviting and hostile. Spancer don’t want to be liked, at least not by the 99.9% of people who are happy to switch their car radio on every day and hear the same gaddamn Katy Perry song that they heard the day before, and the day before that. What needs to follow this iron-spiked intro is a barrage of unrelenting riff-clad energy and a venom-frothing vocal hatred menacing enough to make Satan himself sniffle into his coat-sleeve.

But for me this doesn’t really materialise on what has to be said is a rather pedestrian release in many ways. Sure, Spancer have primed themselves for bludgeon-mode with a twin bass-player attack, and a heavy Burning Witch/Khanate influence casts a long shadow ironically over a record entitled ‘Greater than the Sun’. Opening mantra ‘The Great Saint Equalling Heaven’ is as dynamic as the band achieves – moody doom atmospherics with some scrotum-thumping Iron Monkey quirks and Church of Misery-isms littered along a pathway to a troll-infested swamp. But after 15 minutes of harsh noise-bound sludge, you’re yearning for some differentiation away from all the established bands mentioned above which sadly never develops. ‘Those Once Lost – Godhead’ is pretty much just more of the same, first swinging a boogie-doom mallet around your head then thudding out the ensuing pain by simply making the initial half-decent riff last another five minutes. ‘Agent Sirius’ crawls through further pastures of dogged drum beats, and slithering bass before opening out into a pretty damn catchy chorus which doesn’t quite fit with the unholy filth of this beast’s opening.

The dual bass-player thing isn’t fully utilised for me on this record – it doesn’t add any depth, texture nor the sense that this is heavier than a rhino squeezing out a Guinness-shit on Saturn. One bass-player is generally enough for any band and it feels as though Spancer, whilst having lots of decent ideas, haven’t separated them all out and developed each into an individual song. By the time closer ‘(I Am) Phoenix’ hits the speakers all attempts at forming anything other than gruellingly slow and Vaseline-thick sludge have all but vapourised into the night sky. Sure, there are some neat little spacey moments and some Saint Vitussy string bending via a wah-wah peddle, but by the time the track eventually picks up a bouncier pace it’s all worn a bit thin.

Maybe it was the over-aggressive press release stance that got my guard up. Maybe it’s the super saturated doom market that bands like Spancer are having to play directly into to attract attention that makes ‘Greater than the Sun’ come across as just another OK record by another average European sludge band. Or maybe I was just expected a little bit more from this already 12-years established German mob who have some strong support behind them in the shape of Church Within Records. But ultimately for me this is a forgettable album unfortunately suffocating under the weight of confusion around its own ideas. Greater than the sun, this is not.