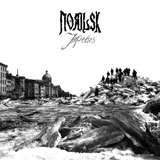 Given the accompanying press release makes much of how Norilsk draw influences from the likes of Thergothon and My Dying Bride it’s genuinely tempting to wonder if they should fire whoever does their press – because realistically this collection owes more to the likes of Isis or Cult Of Luna to these ears than any of the doom death brigade.

Japetus itself locks into a simplistic, slow groove of a riff and stays with it for most of its 8 minute duration. It’s the kind of simplistic two noter that stays in your head alright, but it’s also very much the kind of thing you’ve already heard a thousand times before. Barring a brief up tempo moment in the middle, this track seems to go absolutely nowhere. Sadly, we’re off to a pretty underwhelming start, and when your release is only three songs and one of them is a cover, you cannot afford to have any slack like this.

The other original on this EP, perhaps get the balance of unfluences right. Potsdam Glo rides in on a guitar line that perhaps does owe more to the mooted MDB influence but it’s not long before we’re back into a bass and drums based verse and some twinkly guitar harmonics. There’s more ponderous riffing and some clean vocals that seem a little more distant than they should. Again, it’s hard to hear this without thinking of many other bands doing this kind of “post metal” thing. Again, it feels like we’re waiting for a climactic moment that just doesn’t arrive here, and while the sense of melancholy is more palatable it seems strangely forced.

The Voivod cover Negatron is, strangely where the band come across as most comfortable. It actually compliments their approach in terms of mood, and seems almost like a prototype from which they’ve drawn part of their approach… But they commit the cardinal sin of not playing the riff properly. You DO NOT fuck with those dischords Piggy made his own, and to play the song without them is borderline sacrilege. They capture the space within the original, but completely miss the venom.

While there’s nothing inherently unlikeable about what Norilsk are doing, it’s unfortunately anything remotely like a character of its’ own. The basic idea – to mix the older doom/death influences with a more modern sound is, on paper, a fine one but it just seems like the songs are too simplistic and formulaic to really pull it off. Originality is not an absolute necessity to making good music, but this is too generic for its’ own good.