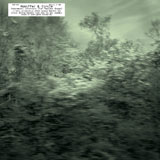 In what is one of the year’s most anticipated collaborations in the avant garde rock spectrum, Finland’s celebrated psychedelic warlords Circle invited Mamiffer (the expansive, piano-based project of Isis’ Aaron Turner and his other half, Faith Coloccia) to come and create a monster with them, in a church. The first results of what is to be an ongoing partnership are, almost predictably, engrossing and brilliant.

The 19th century Finnish house of worship in question contains an ancient Paschen Organ, whose enormous pipes provide the core of the reverential atmosphere on this record, like a vast, resonating organic entity from which all of the human participants grow. They bring fragile, scratchy viola, echo-heavy bellows from Turner, and other elements such as Asva-esque baritone and melancholy guitar notes, to the picture. As the PR correctly says, the trappings of both the refined piano musings of Mamiffer and the heady thrumming Circle made their own have been left behind in what is an austere but still involving journey through some shady, melancholic but stirring pieces. It’s almost like Christmas carols slowed down and filtered through the jarring Ligeti pieces used in 2001, hymns lost in space if you will, although eventually bedded down in the organ’s comforting warmth. Part of the jarring undercurrent is set up by some truly horrible digital-sounding feedback, which emerges early in track one, ‘Kaksonen 1’ and which I find unbearable even at its low volume. The thought of this coming back to assault you keeps you subconsciously on a knife edge throughout these pieces. Return it does, although in a more augmented version, in the final track, ‘Kaksonen 2’, be warned.

The occasional drifting in of what sounds like choral parts, down in the mix, further increases the tension a la Ligeti, like on the track ‘Vaso Luna’, but really adds to the still, often icy beauty of this album. In fact this is one of the best realised tracks, with layers of patient acoustic guitars, picking out a gorgeous undercurrent for Circle’s vocalist Jussi Lehtisalo to declaim over.

‘Tumulus’ is where Turner exercises his latter-period croon to great effect, over an incongruously jaunty but effective organ melody, later coalescing into a gorgeous shaker-enhanced whole. Then comes ‘Vessel Full Of Worms’, which might sound like a Repulsion song, but it’s actually the climax of the album, synthesised strings lying atop the organ, before some of the best ever earth-moving guitar noise emerges, it’s truly inspiring stuff. It even appears to have Gregorian chanting in the background, but if you’re in a church, why not?

Track six ‘Mätäneminem’, which builds to a maintained climax, is very affecting, with some near-operatic vocals from Mika Rättö. By this point, either you have bought into the overwhelming nature of this album or you will have retreated from its brave, but unavoidably religious overtones. It’s impossible to tell if the combined participants are being genuinely inspired to religious zeal by their surroundings, or even from their own volition, but the overall effect is of a vast sermon trying to offer up a tribute to some power greater than themselves.

Fans of everything from Asva to Dead Can Dance will find something to enjoy in this album. It’s to be hoped that hardcore fans of Isis’ riff-based meanderings will still embrace this determinedly drum-free experience, as not merely a ‘drone’ album (it’s far from that), but as a compellingly modern, but somehow ancient summoning of sacred feelings that many humans can’t help to seek out. This being embodied in loving craft on the part of the ensemble, it amounts to a pulsating, emotional experience. Despite everything that religions might represent in this day and age, this album is so affecting that it tempts you to think it’s an attempt to tap into the core of the search for meaning and morality in existence. That natural emotion is maybe a reason such superstitions shouldn’t be dismissed entirely. God, as well as the Devil, does have many of the best tunes, and this record is proof.