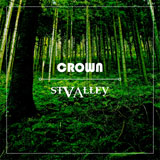 Don’t worry, that’s not the whole review, but yet that’s the curious and unusual way that Crown and STValley have chosen to arrange their new EP, and you know what – it works. It’s like getting a punch in the face from your mate when you arrive at the pub to meet him, sitting down for a nice beer and a chat before taking him outside for a good kicking and then going back inside for coffee together when it gets too cold. Trust me on this one…

Crown are a relatively new entity; a two-piece French sludge project masterminded by guitars/various FX machinery/vocal twosome PG and SA who put out a well-received debut record entitled ‘The One’ in February 2012. SA himself also provides somewhat gentler ambience alone under the STValley moniker on this, his maiden solo voyage.

Crown are the first to come at you out of the darkness. Their opening Wolves in the Throne Room-meets-Yob-meets-Winterfylleth blitzkrieg ‘Beyond the Black Aura’ is well calculated, strong and original in its form as it bounces between chunky doomsday riffs, howling BM vocals and progressive yearnings for a brighter tomorrow. With two guys on guitars, a drum machine and a penchant for the bleak, there’s always a danger that this could end up as just yet another Godfleshy duo firing blanks, but Crown build their own road into the abyss with a terrific amount of rich textures and atmospheric pastures new. ‘Yperite’ is more of an industrial bulldozer. Warming up like an abandoned space station under some distant new alien command, ugly sewer-trawling synths build a skeleton for a trance-inducing bassy riff and SA’s predatory rasp to puncture your warped mind.

The two STValley tracks are sombre detours into SA’s ever bleaker dystopia with just his solemn voice and acoustic guitar for guidance. ‘To Keep You Safe’ and ‘Sacrosanct’ are both delicate, baritone-sung odes and neatly self-contained pieces. However, if you own anything by 40 Watt Sun, Steve Von Till, or the darker end of Johnny Cash’s collection, then you probably won’t find an awful lot new here in the Crown vocalist’s side-project for the time being.

The fact that both of the tracks contributed by Crown are noted as “leftovers” from their ‘The One’ EP session made me go online and download their debut immediately, and for a second EP, you can’t hope for a stronger impact than that. This is the sound of a band with a strong sense of where they’re going and a will to travel beyond the obvious. If you like your sludgy doom to stray beyond the traditional riff n’ growl and down that left-hand path, then I’d urge you to let Crown drag you into their murky lair. I’ll see you down there.