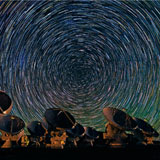 Portland ‘Stoner-Pop’ band Black Pussy apparently derived their somewhat controversial name from The Rolling Stones’ ‘Brown Sugar’. The band are adamant it isn’t intended to offend anyone, arguing it represents the rock’n’roll spirit of the 1970s, the decade in which the groovy space rock of ‘Galaxies’ takes root.

The A Side of this split clocks in at a whopping 22 minutes of big, occult, mystical rock’n’roll, based around just two riffs. Although this might deter the casual listener, the song is carried by an almost hypnotic, trancelike quality, aided by monotonous, chanted, powerful vocals and winding pentatonic leads which drive it forward into uncharted territory.

Everything on this record sounds absolutely huge, especially the drums, which fix the track into a groove with the use of some well placed fills as the band moves from swirling, mystical clean tones to a crushing crescendo of overdrive. Synth/organ parts are used to add subtle overtones to the spaced-out texture, taking queues from early Pink Floyd as they begin to take the centre stage to resolve the riffwork at around the fifteen-minute mark.

The track culminates in an appropriately huge psychedelic wig out, descending chaotically into a glorious mess of analogue feedback. Repetitive ‘Galaxies’ may be, but the band does an admirable job of trying to hold the attention of the listener, with instantly memorable riffs and intricately layered parts.

Biblical Proof Of UFO’s take us into the first part of their three-section B-side ‘Orbitals’ with a guitar riff that kicks back on a more relaxed, laid back note, like some kind of hybrid between early Fleetwood Mac and Queens Of The Stone Age.

‘Orbitals’ showcases a group of phenomenal musicians with a colossal range of influences, from those we might expect to hear in stoner/space rock, such as early Pink Floyd, Black Sabbath, and the Atomic Bitchwax, to the more unusual for the genre, like the red hot, Santana-esque lead guitar in the first section, or the funky jazz/fusion drum and bass work in the third, complete with gloriously volatile, semi-improvised synth solos and interspersed with trippy guitar breaks which drive home the prog rock roots of the band’s sound.

Through the fusion of this myriad of different styles, Biblical Proof Of UFO’s have managed to create something that is both retrospective and innovative, and more to the point, supremely listenable – if you’ve ever enjoyed the more progressive side of stoner rock, check this out!