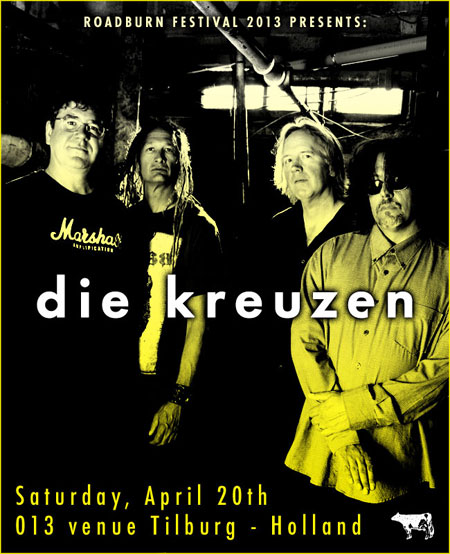 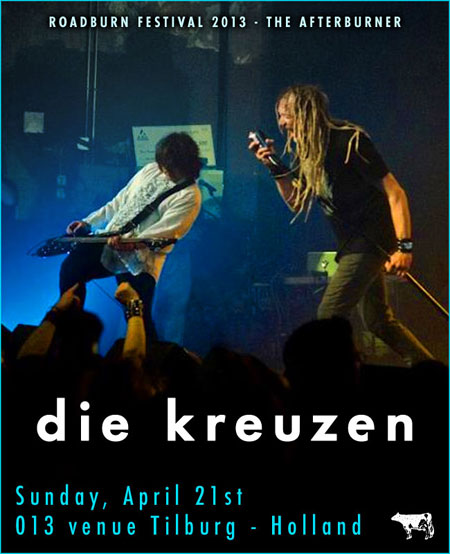 Milwaukee’s legendary and influential Die Kreuzen is set to grace the stage at Roadburn Festival 2013 for not one but two highly anticipated shows: the band will appear on Saturday, April 20th (main stage) and again on Sunday, April 21st (Afterburner) at the 013 venue in Tilburg, Holland.

Earlier this year, the band played their first hometown show in 20 years at the Lest We Forget benefit concert. Founding members Keith Brammer (bass), Dan Kubinski (vocals) and Erik Tunison (drums) were joined by Couch Flambeau’s Jay Tiller with original guitarist Brian Egeness’ blessing. They have been waiting just as long for them to return to Europe, and Roadburn considers it a real coup and a tremendous honor to present Die Kreuzen at the 18th edition of the festival.

“I am so thrilled that Die Kreuzen is to be included at Roadburn 2013. This event will be a fantastic milestone within die kreuzen’s history, I truly feel honored to be recognized by such awesome artists and organizers at such a wonderful, creative and diverse event!” –Daniel Kubinski.

“I’m honored that people not only remember us, but continue to listen to the music we made so many years ago. This event will be interesting and memorable, in the best possible way. Thanks to all for inviting us to be a part of it” -Keith Brammer.

“It’s 106 miles to Tilburg, we have a full tank of gas, half a pack of smokes, it’s dark, and we’re wearing sunglasses….Hit it!” -Erik Tunison.

“This will be fun” –Jay Tiller.

Fans of everyone from Syd Barrett and Van der Graaf Generator to Wire and Rush, the four Midwesterners were likewise captivated by the frenetic pace of the first Circle Jerks album. The result? The rampaging Cows & Beer EP, filled with breakneck riffing, tirades against jocks and screeching odes to boredom and self loathing. They toured like mad before taking a break to record their mind-blowing eponymous debut LP. Packed with 21 songs, it is a ferocious primer on hardcore done differently. Then it was time to pile back into the van for another two years of touring.

The next studio visit yielded the genre-defying October File. The noisy cerebral beauty sent plenty of punx running for the door, but open-minded headbangers, shoegazers and assorted other alt-rockers happily filled in any gap that might have otherwise appeared in the band’s following. By the time they dove into the more psychedelic, tripped out Century Days era, you could not pin down Die Kreuzen even if you tried. A point driven home by the thoughtful cover of Aerosmith’s ‘Seasons of Wither’ on the Gone Away EP released in 1989.

After Cement (1991), it was time to call it a day. As with every innovative underground band that ended up dissolving before “hitting the big time,” it is tempting to try to rewrite Die Kreuzen’s history. But why bother adding new chapters based on “What if…”? Sometimes it is best to accept the natural forces of entropy and just appreciate the legacy. Especially one as diverse as Die Kreuzen’s.

Today, it is clear that Die Kreuzen’s take on hardcore, punk and metal has been extremely influential on myriad bands. Unsurprisingly, at least three Roadburn curators put the band at the top of their wish list in hopes of a reunion. Thanks to their tireless efforts, Voivod managed to get Dan Kubinski to join them at this year’s festival.

Together, they treated the crowd to an electrifying version of ‘Man in the Trees’, which the metal pioneers from Quebec covered on Lean Into It – A Tribute to Die Kreuzen. We are thrilled to welcome Dan back for a full-on Die Kreuzen reunion with Erik, Keith and Jay. If their setlist from May is any indication, we are in for a real treat next spring.