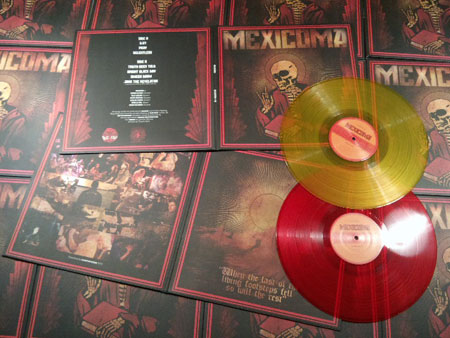 You’re about to witness one of the heaviest bands of the gerne. These 6 dudes (incl. 3 guitars and 1 heavenly hellish voice) from Sweden bring you an earth shattering melange of stoner rock, doom and metal. So heavy, so melodic, so unique … no need to categorize any further, just listen for yourself …

Since the beginning in 2006, MEXICOMA has grown from being a clean-cut stonerband to expressing a much more ambient and heavier sound. Just as a good whiskey, MEXICOMA has needed the time to age and evolve to get the right taste. The earlier flirt with the 70s and more peeled off sound, has developed into a heavier and saturnine presence, without discarding their riff-based foundations. The sound today is easiest described as heavy-hearted and transformative, but at the same time still captivating and progressive.

MEXICOMA‘s self-titled EP is far from the first recordings, still the release is stated as the first official issue. Although the band has been a part of Swedish scene in the north for several years, the time is now to reap what once was sown. MEXICOMA is ready to conquer both the international scene as well as, once again, the Swedish one.