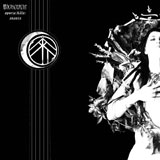 Idaho duo Wolvserpent have been slowly developing their brand of tar-black doom over a number of years, always standing out from the crowd of riff-wranglers through their haunting use of Brittany McConnell’s violin and, well, by being a duo! I’m happy to admit that it took seeing the two of them support Wolves In The Throne room, Brittany rising up from behind her drum kit to add string melodies to Blake Green’s thundering riffs whilst still apparently playing drums, to fully accept that such dense and layered music could be created, could be performed, by two people.

It’s violin that opens Aporia:Kāla:Ananta, a forty-minute, single-track work with a haunting air that cascades from the speakers. Whilst perhaps not the most metal of instruments, and oft-derided for its place as a romantic cliché in some of the more heart-rending doom bands, the single voice of a violin lament can be hugely atmospheric and it is used to mournful effect here, acting as a capering sprite in prelude to the eventual arrival of the heavier elements. Heavier elements which are…slightly disappointing. Harsh, guttural vocals and a repetitive, stumbling drum hit dominate proceedings with little change until they drop out, unmourned, and the forlorn ghosts of strings take centre stage once more until they themselves fade into smoke and crashing, abyssal guitar riffs rise again. So far, so OK. Something needs to change, I think to myself. Something needs to happen.

And it does, oh it does. The red wax seal on an ancient canopic jar cracks, the reeking smoke of millennia pours out from between obsidian doors, an unholy syllable is barked from cracked lips. Oh god, IT HAPPENS.

The guitars somehow coalesce from simple chord structures into a sound wrenched by blood-warm winds blowing through the skulls of ancient beasts to form the high, skirling clarion of the necromancer-princes of Xothique. Notes are held, tortured, and stretched like skin across ironwood frames. The drums beat out a slow, lurching rhythm that leads the march of an undead horde across plains made of bone-dust, their thin forms lit only by green flame and hatred. It is, quite genuinely, a terrifying sound that sets my hair on end and shivers down my spine. It takes an effort of will not to cower, as I would cower at the sight of something pale and bloodless passing by the entrance to my antediluvian cave-hovel.

Eventually, so slowly, the awful wails fall and fade revealing a chattering violin loop and the distant wash of waves on a shore of ground glass. I am released from the visions that possessed me back into the real world, the mists receded and I am back where instruments are simple, understandable things.