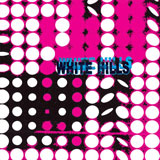 Some album titles are unimaginative, or in a lot of cases, just plain shit. ‘St. Anger’, ‘Ten’, ‘Hillbilly Deluxe 2’, ‘Bleach’ – yes, we’re thinking of you. Others may be well worded, but bear no relevance to the musical content they are designed to either advertise or depict e.g. ‘In Through the Out Door’, ‘Black Ice’, ‘Eliminator’. And then there are those which hit the nail firmly, succinctly and sublimely on the head. As this record fades from the speakers, the one word which most sums up the sound, feeling and tone blasting from White Hills’ impressive backline is indeed ‘Fried’. Deep fried. Acid fried. Brain fried. Amplifried. The Rock element of the moniker is up for you to untangle. Is it a far-off lonely world in the outer galaxies? Does it refer to the regressive, desolate economic landscape of our long-crippled planet earth? Or is it simply the mind-cleansing euphoria of good, heavy psychedelic ROCK music? Knowing White Hills, and especially the forever evolving song writing of founder guitarist Dave W, it’s all of those interpretations, plus a thousand more.

Compared to last year’s mind-juggling opus H-p1, ‘Frying On This Rock’ is lighter in terms of number of songs, but it’s still very much a long-player at heart with three of the five pieces breaking the eight minute barrier. Mixing a sublime cocktail of psyche, rock, metal, jazz, electronica, prog, disco and even drone, Dave, along with bass-player Ego Sensation, synthesizing expert Antronhy and recent touring/recording drummer Nick Name, once again strip down to their lava-lamp-effect bathing suits to surf wave after wave of a now trademark glorious cosmic ooze that very few bands can currently match in any of its unlimited dimensions. Once again, the New York City trio have taken in the force of The Stooges’ ‘Raw Power’, the mellow beauty of ‘Are You Experienced?’ and the claustrophobic distortion of early Kraftwork and sculpted a warm and attention-gripping album of intensely driven talent.

Kicking down the first door with a song that rocks as hard as anything they’ve ever shared to date, ‘Pads of Light’ sees hypnotic electro space effects and Nick Name’s glorious tom fills swing merrily around Dave’s carousel of interweaving riffage. The solo is sublime, on the one hand touting a Hendrix/Duane Allman-esque finesse, but at the same time dissected by the same high-pitched, yet danger-bound tone of success that popularised the mid-90s appeal of Monster Magnet. Mind. Bending. ‘Robot Stomp’ is a different journey all together. A one note riff is expanded, contracted, warped, flipped, multiplied and divided in every which-way imaginable over a near 12-minute experience that’s roughly akin to condensing down an entire Neu! or Hallogallo concert. What starts off as a novel bounce swiftly descends into a labyrinth of sinister background effects which pierce into madness as that bass riff just ploughs through all conscious thought and into drone territories.
It’s by far ‘Frying…’s least accessible moment, but it marks a notable departure from any notion that may linger within new listeners that this is to be a simple, fuzzy hard rock album. String instrumentation is introduced, and it’s as if you’re Jonny Depp starring in your own version of ‘Fear and Loathing in Las Vegas’ – blasting your tired mind with new, and more beautiful narcotics until hitting the wall of intellectual and logical oblivion.

‘You Dream You See’ is the hangover from ‘Robot Stomp’s night before. Sun-fried wah-wah peddles blast slumbering bass riffs and dreamy paraffin-burning solos, like putting Hawkwind into a microwave and leaving it on high for 6 minutes. Dave’s vocals are sparse, but yet in curious opposition to the lazy, inconsequential electric guitar storm, the lyrics are strangely, and darkly political: “All the things that you dream… is this for real? All the money, you see, you dream… is this for real? All the people you see, most are poisoned, spreading disease, this is for real.” ‘Song of Everything’ returns us to the acid fryer. Starting out with Dave and Ego’s head-nodding rhythms and tight, slaloming guitar work, it breaks out into a full-blown mindfuck of gentle, psychic Eastern noise with (I’m presuming) the face-painted band-leading duo whispering and murmuring complete gibberish deeply into the mics. Gentle bass drums and keys lead us back to the opening riff for a last bake in the oven of chemical delights.

Everything thus far has been leading us up to ‘I Write a Thousand Letters (Pulp on Bone)’: 14 minutes of desert mirage in audio form. Nick Name’s simple snare roll is the only constant with Antronhy, Dave and Ego dancing around him like a trio of high, naked virgins prancing around a camp fire on a May Day morning. The random and poignant, but yet un-evolving, piano lines almost sound like the introduction to some bizarre 80s news bulletin anchored by the Eurythmics. Dave’s guitar rises and crashes, in and out of both distortion and then clarity as this desolate masterpiece of noise, rock and brooding prog echoes through your skull. This is the soundtrack to dreaming up a futuristic dystopian planet in the outer echelons of possibility.

White Hills come from the future and they come in peace, but it’s a glorious space-cake riddled peace which will stretch your understanding of just where an electric guitar can take your mind. Does it rock? Oh yes it does, but if you’re expecting straight up boogie and simple, cheap thrills, kindly put your debit card away. However, if its scorching leads, mysterious experimentation, cranium-expanding musicality and a tightly-ravelled thematic that you’re open to, then welcome aboard the greatest spaceship of them all. So what exactly is frying on this rock? I think Dave W is trying to tell us that we all are. 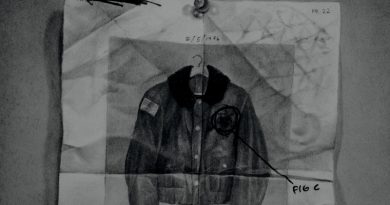