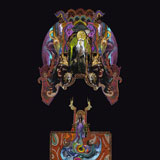 Aurora Borealis have a good track record when it comes to pushing originality and are clearly not afraid to put out some truly challenging and left of centre releases. From the ultra-raw black metal oddities of Wolfmangler and Dead Ravens Choir to the more familiar yet esoteric artists such as Jesu, Grails, Moss and KTL. Basically they know their shit, so when a new artist joins their stable, it’s almost compulsory to check them out. USA Out Of Vietnam, like a lot of Aurora Borealis releases, seems to traverse a wide spectrum of styles, at their heart beats an obvious love of prog rock which fuels the epic song structures and utilisation of a myriad of instruments – combined with a healthy dose of doom, drones, electronics and lashings of psychedelia.

Straight from the opening bars of Archangel, there is more than just a whiff of Glaswegian soundtrack maestro’s Mogwai, from the distant vocoded vocals to the grandiose and heavy guitars that reek of emotion with a darker, sinister edge to the almost choral, soaring vocals adding gravitas. These guys definitely score on the heavy scale though, surpassing that of their influences, driving each track and crushing the listener. You Are A Comet, You Are On Fire (actually the shortest track on the album clocking in at just under 8 minutes) mellows things out somewhat, the prog rock love is certainly brought to the fore here, lots of uplifting melodies sitting comfortably amongst the heavy guitars and gentle drum fills. Things are broken up with a vocal sample describing some kind of spiritual awakening before bursting into an epic crescendo complete with bombastic brass accompaniment and a soaring cacophony of guitars.

Asphodel/1322 creeps up on you with gentle ambience gracing the first couple of minutes with shimmering cymbals and a far off distant melody entrancing you before layers of feedback arrive, signalling the onset of the guitars, again the whole vibe is strangely uplifting whilst entirely crushing at the same time, a great feat to pull off. In parts there is also some hark back to What You Don’t Know Is Frontier era Asva, concentrating on that interplay between the dark and light, truly inspiring and immersive stuff!

The final half of the record lends itself to two tracks that between them rack up nearly half an hour of listening pleasure. Talk about saving the best for last – Leg Of Lamb kicks things off with distant, subtle piano work and softly sung vocals, before breaking into folk style guitar strumming…this all lends you a false sense of security before the heavier material hits home. Still, there manages to be a lot of pop sensibility encapsulated in their sound, the heavy guitars adding colour to the picture they are painting rather than just brute force, soaring choruses and catchy melodies, it’s all there lurking underneath the surface.

Tonight The Dead Walk ends the album in spectacular fashion, kicking in with some more ‘straight’ stoner rock influenced material before delving deep into their bag of tricks and taking you on a journey of ridiculous proportions. I could sit here all day trying to pick out all the little intricacies that are on display here, suffice to say it is better to experience USA Out Of Vietnam for yourself and give yourself over to them completely as the journey of the album as a whole is truly spectacular.

A solid debut release, I am sure we will be hearing a lot about these guys in future!