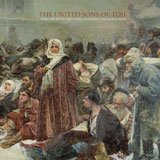 Comrades! The United Sons Of Toil want you to throw off the yoke of the capitalist oppressor and join them in their glorious struggle for freedom, to rise up and throw off the chains of bondage and to listen whilst they educate you as to the reality of the class struggle…while rocking your goddamn faces off with heavy-duty noiserock.

What we have here, my brothers and sisters, is a different kind of heavy. ‘When The Revolution Comes, Everything Will Be Beautiful’ isn’t emotionally heavy, and while it certainly has its moments of musical heaviness, what it really is, is philosophically and conceptually heavy.

Not content with having an anti-capitalist, anti-imperialist, pro-radical democratic agenda shared by the band themselves, there is also an overarching concept to the entire album, best summed up by this excerpt from the somewhat voluminous and comprehensive liner notes (which also include individual breakdowns of the meaning and story behind each track, along with references to further reading, should one be affected by the themes raised therein) –

“The story is one of an oppressed and hopeless people. Pushed to the brink by corruption and squalid, inequitable conditions, they resort to violence. As they struggle, they convince themselves that their violence is justified and, in fact, that they have no other choice. When they come to power, they face the same problems as those they replaced and become oppressors themselves. Dissension within the new order sets the cycle in motion again. Fundamental societal change can emerge only through radical individual change.”

See what I mean? Heavy.

Of course, it’s all fine and dandy having such a worthy message, but ultimately it’s a waste of time if the medium containing said message just isn’t up to snuff. Fortunately, The Sons are no slouches in THAT department; ‘When The Revolution Comes, Everything Will Be Beautiful’ is chock full o’ taut, tight, stop-on-a-dime punchy noiserock, very much in the nineties ‘Amphetamine Reptile’ tradition, but with an infusion of some newer, fresher sounds of a similar bent.

So it is that ‘The Shining Path’ is reminiscent of the angular tension of Mike Patton’s Tomahawk, but with a touch of Neurosis’ Steve Von Till in the vocal department, and elsewhere the music is a mix of Jesus Lizard and Big Business rocking, Shellac-like angularity, the intensity of Dazzling Killmen and the open-chorded epic quality of Neurosis – most apparent on ‘The Contrition of The Addict’, which features a vocal performance akin to a more ‘hardcore’ Dave Edwards, alternating with that Von Till howl.

‘Sword of Damocles’ throws a little electric organ into the intro, opening up the sonic palette, and ‘Operation Cast Lead’ has a doomy Corrosion of Conformity meets Wino feel to its windswept bluesy slow-mo riffing intro, before exploding into spastic angularity.

Not only are these three boys blue-collar political theoreticians and musical dynamos of discord, you can also call ’em prophets – take a gander at that breakdown of the concept behind the album.

Aaaaaanyhoo, it’s rare to find a band THIS articulate, passionate and determined in these days of quick bucks and selling out, so kudos to the three of ’em for sticking to their guns. Sure, they recognise that they live and work within an inherently flawed and corrupt system, but it doesn’t stop ’em from doing their damnedest to only work within it when needs absolutely must.

Their commitment and idealism are commendable, and their tunes ain’t too shabby either.

Listen below to ‘Alcoholism In The Former Soviet Republics’.