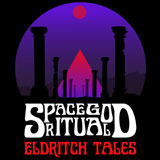 Oregon doom duo Space God Ritual clearly has a huge boner for HP Lovecraft. There is, of course, absolutely nothing wrong with that. Lovecraft is a towering influence over a lot of metal; his twisted, terrifying tales are so metal it hurts. Having songs called ‘The Doom Of Sarnath’ and ‘Mad Alhazred’ is a bit of a giveaway too.

Musically, there’s something delightfully Vitus about the band, particularly the sermon-esque intro track ‘The Elder Door’. Vocalist Alexander Olaff has a wonderful touch of Wino about his voice, which adds a layer of eccentric menace to the tales of madness and monsters. The howling laughter that accompanies ‘Madness!’ is a nice touch, and there’s something almost carnival like about the chorus vocals. This is followed by the more measured, almost bluesy ‘The Weeping’, which conjures up Sabbath’s mournful psychedelica. A magnificent, sprawling piece of psychedelic doom, it raises spectres of doom’s evolution from psychedelic rock and spirals into crushing riffs.

‘Necromantic Woman’ is what could be regarded as a potential hit single. It has a catchy, driving main riff and reigns in some of the more expansive moments into a grinding head nodder. It is a three and a half minute showcase of what makes Space God Ritual an interesting proposition; the unique vocals, the catchy riffs and the general oddness.

‘Mad Alhazred’ is more straightforward Vitus doom, rippling with atonal guitar lines. This is probably the best song on the record, an exercise in how strangeness can benefit doom metal when used effectively. ‘The Web Of The Witch World’ is less stellar, with a chorus that tries it’s hardest to catch your attention but yet just fails. Maybe it doesn’t benefit from being placed on the record after the tour de force of ‘Mad Alhazred’ but it fails to hit the spot.

What makes Space God Ritual more worthy of your attention than other stoner doom acts? They have that 70’s fuzzy guitar tone, occult overtones and riffs aplenty. But what they have that sets them apart is the sense of foreboding and drama that you would, ironically, find in a Lovecraftian novel. They strike me as a band that should be four or five strong, not two. They have an accomplished sound, polished and clear but losing no atmosphere. ‘The Doom Of Sarnath’ is a great example of the dramatic feeling, a story of doom and hopelessness.

‘Eldritch Tales’ is a unique piece of doom, standing at the crossroads of Vitus/Sabbath and a true psychedelic rock path. Mix in copious amounts of perfect lyric material and you have a fine album. This is the Sound of the Doom That Came to Sarnath… 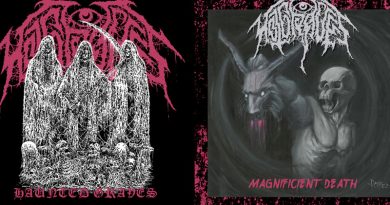