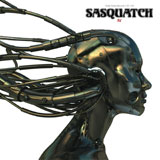 Familiarity and reliability are great things, like that pair of jeans that’s served you well for so long and feels like a second skin, the car that just keeps on going and starts first time, those Monty Python films that never fail to raise a laugh no matter how many times you’ve seen them…etc. Great rock and roll bands also have that same ability to slip into your consciousness and help to feel like time and the world is standing still, even if it’s for a brief 40 minutes or so. Sasquatch are that kind of band.

Sasquatch’s previous album, the cunningly titled ‘III‘ (which coincidentally followed their first two albums ‘I‘ and ‘II‘) established them as purveyors of filthy, blue collar heavy rock and roll and caused so impressive ripples in the stoner rock pool. New album ‘IV‘, picks up right where “III” left off but with the benefit of 3 years worth of hard work and touring behind it. The mammoth, woolly riffs remain in each song courtesy of Keith Gibbs, all bound up in a huge, warm, fuzzy sound that covers everything like a blanket. Whether they’re rocking straight out of the gate as on opener ‘The Message’, kicking some epic ass on ‘Eye Of The Storm’ or laying down some sweet, 70’s style grooves on ‘Sweet Lady’, Sasquatch pile on the riffs and making sure they stick…like some particularly potent, thick syrup. Gibbs is particularly worthy of merit for his vocals which are raw, soulful, passionate and powerful. The Dave Wyndorf comparison still has some legs here but Gibbs’ bellicose howl is developing its own character and gaining strength as well as backing up some very tasty and insanely catchy melodies. In fact ‘The Message’ would be a contender for a hit single if only the band were younger and far prettier!

Sasquatch come with the weight of history behind them; they have to live up to their own reputation, the reputation of their label and also the weight of 40 plus years history of the heavy rock genre which they subsume with aplomb and due reverence. On no counts do they let themselves down as they imbue their meaty stoner rock with enough blues and soul to lift this into classic territory. They may not be the obvious band that comes to mind when thinking of the Small Stone roster of bands but there is little doubt that they are firmly in the upper echelons when it comes to quality and sheer enjoyment.

Now, San Antonio man Rick Dyer recently claimed to have killed Bigfoot but this album is proof that Sasquatch, like rock and roll, is alive and well and going from strength to strength!