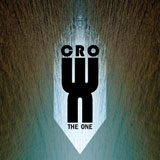 The sound of a molten universe collapsing in upon itself whilst simultaneously birthing a colossal multi-headed beast is the best approximation of the sound that greets me as I place the innocent-looking CD of The One by French duo Crown into my unsuspecting player.

A towering, nigh-on overwhelming juggernaut of blast-furnace guitar ploughs its way out of the speakers, driven by  the splashing cymbals of a minimal-yet-completely-effective drum-machine and further emboldened by a massive bestial roar, instantly putting Crown into such company as the mighty Floor, early Godflesh and touching on early Isis. These are guitars tuned to the richter scale.

The track is called ‘Cosmogasm’ and is aptly titled as the sound is both vast in scale and ecstatic in its sheer exuberant heaviness. Following the needle-buried-fully-in-the-red intro section, P.G and S.A – they who are Crown – reign the neutron-guitars in momentarily for an atmospheric interlude of distant churning and metallic chimes, and to give us a minute of breathing space, before piledriving back in again in full-on annihilation mode, guitars at bowel-loosening volume and subtly applied electronics adding a pinch of melody and thickening the sound even more – as though it needs more thickening – whilst S.A howls like the great beast itself.

‘The One’ shimmers into existence atop a crunching yet restrained rhythmic spine before letting loose those depth-charging guitars and a loop of something pitched somewhere between a dentist drill and a scream. Backing off somewhat, one guitar adopts a chiming shimmer while the other adds a chugging rhythm as S.A. adopts a droningly melodic post-punk style echo-and-delay ridden vocal – think Ian Curtis channelling Justin Broadrick – for a while, until the dam holding back the beast breaks and those inhuman roars storm back in.

Mention of Broadrick brings up the subject of Jesu, who are the band closest to Crown in many ways, balancing as they do that mechanised crunch, the monstrous guitars and the buried melodic tendencies, but one thing sets them apart from one another – Crown simply do this better than the prone-to-patchiness Jesu.

Take ‘100 Ashes’, for example, a track entirely built around echoing clean guitar, a hauntingly melodic sine wave, hissing electronics, a pulsing spine and S.A’s strident, mournful vocals. A similar track by Jesu would, based upon recent outings, come across as weak and dull, yet S.A and P.G deliver it in such a way – and allow it just enough brevity – as to be nothing less than gripping from start to finish. Also, resisting the urge to amp those guitars up allows for it to sit at the heart of The One and act very much as a palate-cleanser and a stepping stone from the first half of the EP to the second without wearing out the listener.

It sets things up nicely for the lurching chug and astringent shimmer of ‘Mare’, with its psychedelic bookending, and the dramatic sprawl of closer ‘Orthodox’.

‘Orthodox’ could only be placed at the end of a recording, so expansive, dark and powerful that anything immediately following it would be in serious danger of being utterly swallowed whole by its mere shadow.

A tribal/military percussive thwack drives the engine of the track whilst echoing guitars of a decidedly ‘Killing Joke-esque’ hue and the dramatic, low-pitched and also echoing voice of S.A make up the foreground.

Steely guitars snake around the central portion of things as the tension is subtly, incrementally, increased, leading to an abyss as everything drops off into nothingness….just briefly. A hammered riff starts up, quickly joined by a complimentary one that is ever-so-slightly out of phase, the drumming starts up again and things lurch back into action again….just briefly.

This time when things resume after a momentary lapse the spiralling, hammered guitar is joined by a steely spine of massive chords as S.A’s vocal resumes, taking us, finally, sadly, to the end.

That two men alone can make such a massive, thick slab of noise is quite astounding, but the main

thing about The One that is hard to believe is that it is actually Crown’s debut recording. I mean, if this had been recorded by an established band it would be impressive enough, but knowing it’s the very first recording by the band really adds weight to it – hell, if this is how good they are just starting out, what will they be like a couple of records down the line?!?!

I fully aim to be there to find out, that’s for sure.